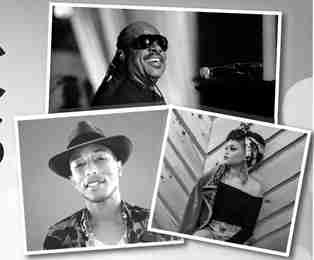 PHOTOS COURTESY OF BILLBOARD, THE COUCH SESSIONS, PIGEONS AND PLANES, AND WBR PRESS

Special guest performances will be given by Pharrell Williams, Big Sean, Andra Day and Alessia Cara, with more to be announced over the coming weeks.

The day of the festival Global Citizens will stand together to call on leaders in America and around the world to uphold their responsibility to end extreme poverty by 2030.

Since last year’s festival, Global Citizen has taken the movement and action-based model to Canada, India, and most recently on the eve of the G20 summit, to Hamburg, Germany.

The 2017 Festival will serve as a platform from which millions of Global Citizens around the world will demand that world leaders fulfill their obligation to take a stand around issues such as education, food security, healthcare, gender equality and sanitation.

“Over the last year, we’ve seen voters around the world reject the nationalism and isolationism that keeps people living in extreme poverty. Now, we are calling on activists and music fans to use their voice to change the world. We couldn’t be more thrilled to be announcing this incredible lineup for Global Citizen. Now more than ever, we need to ensure we work together for the world’s poor,” said Hugh Evans, CEO of Global Citizen.

Wonder echoed his sentiments. “In this crucial time, there is nothing more exciting to me than having the honor of giving my gift of song, words and motivation to the Global Citizen Festival. When we commit ourselves to life issues, we are showing love of the Most High. I was, I am and will always be, a citizen connected to the spirit of everyone on this planet moving forward. Let’s go,” Wonder said.

Green Day lead singer Billie Joe Armstrong said, “We’re grateful to be a part of this year’s Global Citizen Festival. American aid programs make a significant difference in the betterment of lives at home and around the world, and we should all want these programs to become stronger, not weaker. We all play a part in seeing this mission through and it starts with calling on all our leaders.”

“Thanks to the passion of artists and their fans, music has the power to transcend borders and unite people. Live Nation is proud to help the music community come together to make the world a better place through efforts like (the) Global Citizen Festival,” said Michael Rapino, President and CEO of Live Nation Entertainment.

“We can’t wait to get back to our hometown of New York City and play for 60,000 people who have done amazing things to change the world. We are so thankful to our fans for getting online and taking action to support less fortunate people around the world.

We’ll see you on September 23rd,” said The Chainsmokers.

Big Sean chimed in adding, “I look forward to joining these incredible artists and thousands of Global Citizens in Central Park as we shine a light on issues that need to be addressed, such as access to education, which is so important to helping everyone create a better life for themselves and their communities.”

For the fourth consecutive year, MSNBC & Comcast NBCUniversal will air a live simulcast of the festival on MSNBC and MSNBC.com. The Festival will be produced by award-winning producer Ken Ehrlich.

The festival will also be livestreamed on YouTube and Twitter. For the second consecutive year, the iHeartRadio Music Festival and the Global Citizen Festival will take place on the same weekend – allowing for unique in-show collaborations and a special cross-over performance by Big Sean, who will perform on both stages in one night.

Global Citizens can earn their admission to the free-ticketed festival by joining the movement at globalcitizenfestival.com. Ticket drawings occurred throughout the summer and fans were notified by Global Citizen when they were selected.

Issue specific goals for the 2017 Global Citizen Festival campaigns include:

• Education: Secure $3.1 billion in annual funding by 2020 for The Global Partnership for Education and an extra $30M in new commitments to the Education Cannot Wait fund to ensure all children, particularly girls and those affected by conflict and crisis, are in school and learning.

• Food &Hunger: Secure commitments, including from the European Commission and Japan, to meet the UN’s $4.9 billion appeal for countries facing famine and severe food security.

• Health: Secure commitments from world leaders, including those of the UK, Canada, the U.S. and Uganda, towards universal health coverage, prioritizing investments in maternal and child health, vaccines, and addressing pandemic threats such as polio, HIV, TB, Ebola and Zika.

• Girls & Women: Secure commitments from world leaders, including those of Cameroon, Tanzania, Nigeria and Papua New Guinea, to end reform or repeal laws that unfairly discriminate against women, to outlaw gender discrimination and gender-based violence, promote women’s sexual and reproductive health and secure from companies $1 billion in financial support for womenowned businesses – as critical steps forward in achieving gender equality by 2030.

• Water& Sanitation: Secure commitments from the private sector, including PepsiCo, Danone and Nestle, to donate 1 cent per litre of their bottled water sales to the Global Investment Fund for Water, and ensure the Government of Maharashtra in India will implement teachings of menstrual hygiene for schoolgirls into the education syllabus.

This year, fans and activists can earn tickets to the festival by participating in three Action Journeys: For Freedom, For Justice, For All. For example, “Action Journey 1: For Freedom,” requires Global Citizens to complete actions in support of maternal health, polio eradication, girls’ education, increased foreign aid, and more. There are two ticket drawings remaining on Sept. 15 and Sept. 19.