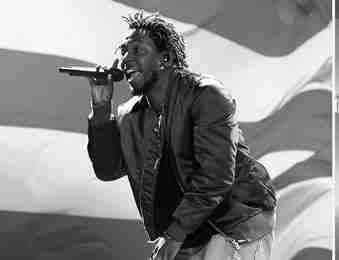 Two years since the release of his Grammy Award-winning “To Pimp a Butterfly,” Kendrick Lamar is back with an album as bold and declarative as its title: “DAMN.”

And while Lamar grapples with familiar subject matter – God, violence, survival and self-worth among them – the energy has shifted away from the jazz, funk-filled sound of his previous studio set.

“He was lookin’ for some closure/ hopin’ I can bring him closer/ to the spiritual,” Lamar raps. “But I told him I can’t sugarcoat the answer for you. if somebody kill my son/ that mean somebody getting killed.”

And, then, like a punch to the gut, Lamar adds: “Ain’t no Black Power when your baby killed by a coward.”

The line is unexpected and, overall, “FEAR.” is brave, in that it puts Lamar in a position to be criticized, just as he was for lyrics from 2015’s hope-filled anthem “Alright.” (On “DAMN.” track “BLOOD.,” Lamar includes audio from a FOX news segment in which anchor Geraldo Rivera and a colleague take issue with the rapper’s bars about police brutality.)
To his credit, Lamar continues to speak his mind, and his rawness is what makes “DAMN.” so damn good.

When Lamar raps, I’ll prolly die tryna buy weed at the apartments/diffuse two homies arguin/ I’ll prolly die, cause that’s what you do when you’re seventeen,” it’s hard not to be moved.
“DAMN.” has the power to resonate, with tracks provoking thought without coming across as preachy. The set has its lighter moments, too. And guests make their contributions count, with Rihanna bringing a slinky vibe to the sexy (but not about sex) “LOYALTY.”
Up-and-coming singer Zacari also plays his part, tag-teaming with Lamar, who sings his way through the pillowy soundscape of “LOVE.,” produced in part by longtime collaborators Sounwave and Top Dawg Entertainment label- head Anthony “Top Dawg” Tiffith.

Those two are joined by producers DJ Dahi and Bekon for the easygoing groove of “YAH.,” in which Lamar exhibits one of his greatest strengths: the ability to speak of higher things in one breath, then acknowledge his humanity in the next. (“And Deuteronomy say that we all been cursed/ I know He walks the Earth/ But it’s money to get, b(asterisk)tches to hit.”) It’s clear that Kendrick Lamar isn’t perfect. But his latest set “DAMN.” gets pretty close.