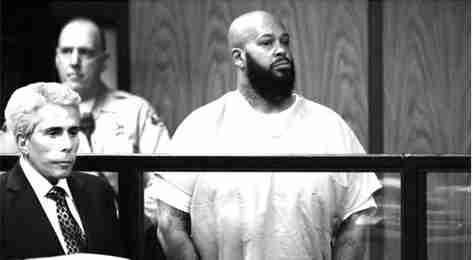 The Los Angeles County district attorney’s office made the allegation and released transcripts of the discussions during phone calls in a filing made public last Thursday that asked a court to look into the issue.

Talk of bribery came in a series of recorded calls in 2015 between Knight, who was in jail, and his attorney Matthew fletcher along with Knight’s fiancee and his business partner.

Knight, whose Death Row Records made household names of Dr. Dre, snoop Dogg and Tupac shakur, is charged with running his truck into two men, one of whom died, in 2015 outside a Compton burger stand after an argument on the set of the movie “straight outta Compton.”

The people on the calls discuss payments of as much as $25,000 to witnesses to say the victims or others at the burger stand were armed at the time, bolstering Knight’s argument that he was acting in self-defense.

Fletcher did not immediately return a phone message left by The Associated Press, but strongly denied bribing anyone to The New York Daily News.

“I’ve never paid anyone, period, end of story,” fletcher told the Daily News, which first reported on the bribery allegations. “I don’t believe suge Knight has the money to pay anyone.”

In one call, fletcher appeared to discuss giving money to bikers who were at the scene.

“I’ll pay anything … if we can get the two or three versions from the bikers on tape and we can get … we’re done,” fletcher says. “It’s going home time. Right? That’s a fair … investment, you know, 20, 25 thousand dollars.”

fletcher told the Daily News he wasn’t talking about witnesses, but bikers who may have cellphone video that could be useful to the defense.

The Sheriff’s Department was tipped off that Knight and others were discussing witness tampering, and requested a warrant to listen in on the calls, the filing said.

A judge found that the calls could be recorded and would not violate confidentiality rules if Knight was first speaking to a third party and his lawyer was then conferenced in.

Prosecutors said they were not yet asking that fletcher be removed from the case, and did not say they intended to file chargers, only that they wanted a court inquiry to see if fletcher through the illegal activity might be conflicted as Knight’s lawyer.

The filing also alleges that fletcher encouraged the sale of surveillance video from the scene to TMZ in violation of a court order, which fletcher also denies.