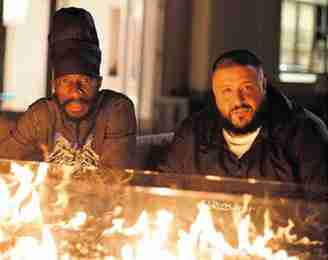 LOS ANGELES – Sizzla Kalonji was recently in studio with DJ Khaled to collaborate on Khaled’s most personal project yet – a new mixtape album titled “Grateful” that is dedicated to his son Asahd Khaled.

As a long-time fan of Sizzla, DJ Khaled says he felt it was important to include his friend and mentor on the project.

“When I hear Sizzla’s music, I feel as if God’s talking to me in a human form,” DJ Khaled said.

“Grateful” will feature several superstar artists from different genres including Rihanna, Quavo, Chance the Rapper, Jeremih, Future, Lil Wayne and Justin Bieber. This exciting new project comes at a very timely juncture in Sizzla’s career. He is preparing for the upcoming “Life Of A Ghetto Youth” tour, which kicks off on June 10.

The multi-city U.S. promotional tour by Vas Productions, led by executive producer Ricardo Vasconcellos, is set to elevate conscious reggae by turning Sizzla’s message of peace, love and unity into action in cities around the country.

The tour will touch seven cities across the U.S. in Florida, North Carolina, Georgia, California,

Rhode Island and Virginia. The mission of the tour is to share the message behind the music in a way that has never been done before.

The “Life Of A Ghetto Youth” is so much more than a series of concerts; it is an opportunity to combine community and music by using the success of the Sizzla Youth Foundation as the blueprint.

Since 2010, the Sizzla Youth Foundation has worked to turn around a neighborhood in Jamaica once plagued by poverty and crime. 2016 marked the first year there was not a single murder in the August Town neighborhood.

The community credits Sizzla’s continued and undeterred efforts as a major factor. “The Life Of A Youth Ghetto Youth tour is fueled in response to ongoing crime in communities throughout the Caribbean and around the world like Chaguanas in Trinidad and Tobago,” Vasconcellos said.

Joining Sizzla on the tour is a megastar lineup of some of the Caribbean’s brightest reggae stars including Marlon Asher and Izac King from Trinidad and Tobago, Pressure Busspipe from the U.S. Virgin Islands and Ras Shiloh from Brooklyn, New York.

The tour is a precursor to the “Life Of A Ghetto Youth” album.The project, produced by Vasconcellos and Vychalle Singh, features an 18-track collection of brand new reggae hits including “Ghetto Story,” “Rough Love,” “Mary Jane” and “Home Away” performed by the talented group of artists who will represent the best of the Caribbean’s reggae industry and will carry on the spirit of community activism, peace and unity.

The album is now available for pre-order on iTunes. The official album release is set for July 7.Sizzla’s most recent album “876” debuted at No. 3 on the Billboard Reggae charts in 2016, where it continues to dominate.This accomplishment further solidifies the artist’s growth, mainstream popularity and successful trajectory forward.