Solange lands first number one album of her career 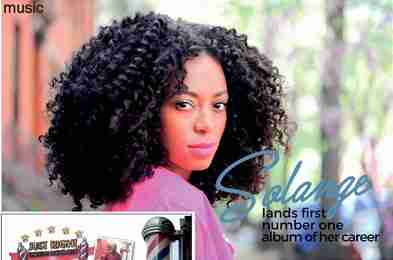 Solange, Beyonce’s little sister, earned her first No. 1 album on the Billboard 200 chart, with her latest release, A Seat at the Table. It beat out Bon Iver’s 22, A Million, for No. 1 — an album that was initially forecast to bow in the penthouse. It debuts at No. 2.

A Seat at the Table launched with 72,000 equivalent album units earned in the week ending Oct. 6, according to Nielsen Music — a stronger-than-expected start. Of that sum, 46,000 were in traditional album sales.

A Seat at the Table is Solange’s third full-length album, following 2008’s Sol-Angel and the Hadley St. Dreams. Her latest release was the 2012 EP True.

A digital book on Solange’s website shares lyrics and photos.

The Billboard 200 chart ranks the most popular albums of the week in the U.S. based on multi-metric consumption, which includes traditional album sales, track equivalent albums (TEA) and streaming equivalent albums (SEA). The new Oct. 22-dated chart (where A Seat at the Table bows at No. 1) will be posted in full to Billboard’s websites on Tuesday, Oct. 11.

Next post Did Parker’s rape allegations doom Birth of a Nation?