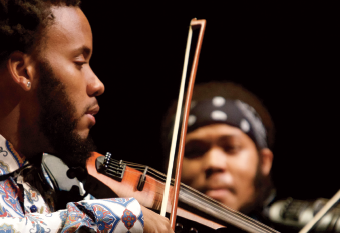 In the heart of Miramar, a historical first is quietly taking place. From now until Feb. 29, a visit to the beautiful Miramar Cultural Arts Park will allow people to witness a one-of-a-kind photo exhibition that tells of the highs and lows of President Obama’s two terms as President of the United States of America. The photos of the President Barack Obama: The Exhibition were taken by the White House’s official photographer, Pete Souza; who spends every day with the president. It has been estimated that Souza takes 500 to 2,000 photos of President Obama a day and only showcases his work in Washington, D.C.

“In advance of Black History Month, and also following on the heels of Martin Luther King Day, it really is an important moment to look at the history and impact that (President Obama) has had on the country and internationally,” said Franz Hall, the Consulate General of Jamaica, last week at a reception in honor of the exhibition. “It’s important to share this moment and its history.”

It has been said that a picture is worth a thousand words and is a frozen moment in time. In the President Obama Exhibition, viewers will get an intimate glimpse into the man who has been the leader of our free world for the past seven years. In President Obama’s look of pensiveness in the Rose Garden, his look of dismay in hearing the news of the Newtown Shooting, his look of feigned surprise after being “zapped” by a child Spider-man and his quiet familial moments with his daughters, we see a man who has shaped and changed the United States. We see a man who gave of himself to his people, and shared the country’s heartache in vivid pose of quiet consternation.

“It’s not something that we get to see all of the time,” said Miramar Commissioners Yvette Colbourne, in awe. “It’s great that our residents can come right here in the middle of our city and see these special moments in history during Mr. Obama’s presidency.”

Special, indeed. How the Miramar Cultural Arts Park came to be the home of this profound and elite exhibit was a bit of a first. According to Miramar Mayor Wayne Messam, one of his staffers reached out to Souza regarding his photos, which are typically exhibited only in exclusive locations like the Smithsonian and the White House, in the hopes of honoring the city’s first elected officials of color.

While Messam would not reveal the identity of his emboldened staffer who took a great chance that paid off, he did mention that the individual impressed upon Souza the significance of allowing Arts Park to showcase 20 of his most iconic photos in honor of the City of Miramar’s 60th anniversary, Black History Month, and the first African-American mayor of Miramar. Souza was apparently touched by the poignancy of the situation and agreed to share his photos for the current exhibition.

“President Obama has paved the way for us with a lot of firsts. And, it’s very special to me because I’m the first Haitian-American vice mayor in the City of Miramar and Broward County,” said Miramar Vice Mayor Darline Riggs about the exhibition and what it means to her. “Being the first of anything is an accomplished legacy.”

“My goal is to do a great job as mayor so that I can leave behind a legacy,” echoed Mayor Messam, who hopes that his tenure in office will be the beginning of a trend for tomorrow’s leaders. “So that I won’t be the last and many more can come behind me to live out the ideals of the dream that Reverend Dr. Martin Luther King died for.”

He went on to say with a note of reverence: “We’re so honored to have this exhibition that is a rare opportunity to be able to bring these photographs here to the city of Miramar. It’s a moving exhibition that captures the most historic moments in the (recent) history of the United States. And, it’s our jobs to ensure that we continue to build on a strong foundation that we are blessed to benefit from today.”