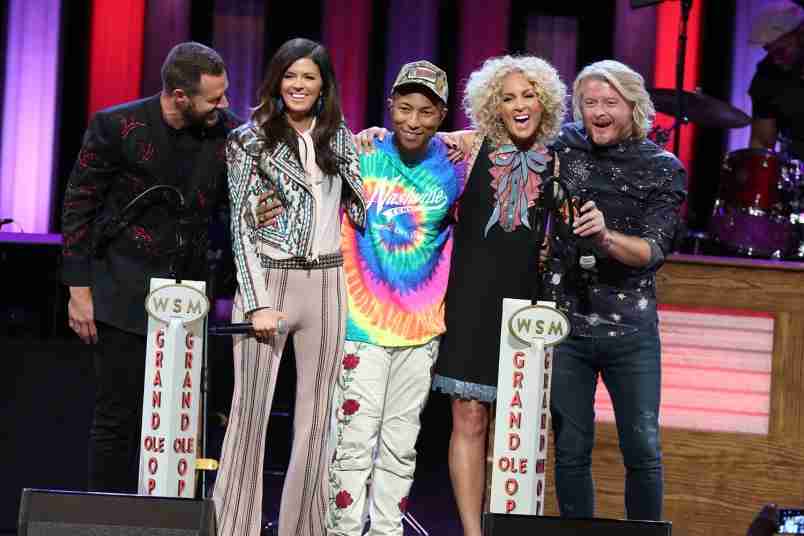 The top pop and R&B producer and artist came down to Nashville in early 2016 and ended up with eight songs for their new record, Wanderlust. “We got caught in a snowstorm, so there was no takeout,” said Little Big Town singer Karen Fairchild during an interview on Tuesday night backstage at the Grand Ole Opry. “We were stuck in the studio and there was nowhere to go and nothing to do but write and make music together.”

“When it got late in the studio, we tasted a little bit of Tennessee moonshine,” said singer Phillip Sweet.

“It hits you out of nowhere,” Williams said of the home brewed liquor.

Williams made his Opry debut earlier this month with the award-winning country vocal group and also appeared on the recent CMT Awards.

If he was trying to blend in with the locals, he did an admirable job. He wore a tie-dyed shirt with “Nashville, Tennessee, Music City, USA” written on the front, and a camouflaged ball cap.

Williams, who is originally from Virginia, said while Wanderlust isn’t a country record, it’s definitely Southern.

From the beginning, Williams asked the vocalists to explore a different kind of harmony, such as on the song, “Boat,” which features a complex and lush layering of their four voices.

“Cause when they sing it’s like listening to a rainbow, if that makes any sense,” Williams said. “You hear all the colors all at once and so clear.” Williams also brought in his good friend Justin Timberlake to sing backing vocals on one of the songs.

Though the country group says it has no plans to switch genres, the uptempo new music has put an extra bounce in their step: Their performance at the CMT Awards will mark the first time they’ve done a television appearance with a large troupe of backup dancers.

“We have an incredible choreographer and he is from Nashville,” Fairchild said. “He has danced with Janet Jackson, Justin, Michael Jackson. And so he choreographed all of this. And it is so much fun. Like at night I am going to learn it and work out.”

Said singer Kimberly Schlapman. “So it’s so good. I can’t wait for fans to see it.”