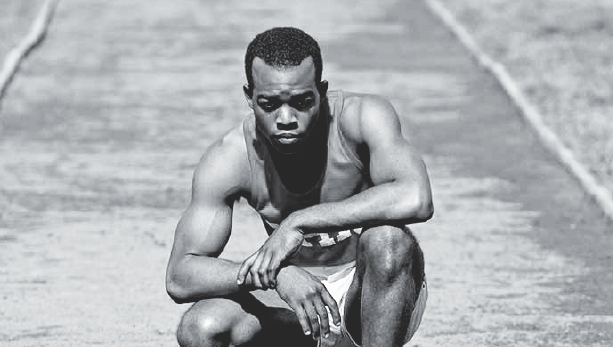 Can a biopic really give its audience the full breadth of a man (or woman)? Not really. It’s hard to fit a lifetime into a two-hour film. Many filmmakers have tried. Some have succeeded; others, not so much. The most important thing about a biopic is its showcase of the talent on which it is based. Biopics also afford the audience an opportunity to get a good idea of who the person is by the end of the film.

With the latest biographical film about a historic black man named James Cleveland “Jesse” Owens (played by Stephan James), called Race, it’s time to examine whether or not the filmmakers achieved their goal: showcase the talent and tell why this talent was so important.

In Race, screenwriters Joe Shrapnel and Anna Waterhouse, tell the story of Jesse’s journey to breaking and setting records at the 1936 Berlin Olympics in the midst of Nazi-occupied Germany. Directed by Stephen Hopkins, the film addresses the records that were broken by Owens from his beginnings at Ohio State University under his coach, Larry Snyder (Jason Sudeikis), to his traveling to Berlin for the 1936 Olympic Games.

The film also captures the turmoil that the U.S. Olympic Committee faced in trying to decide whether to enter into the Olympics given that the Nazis had already taken over Germany and were in the midst of distributing propaganda against Jewish people while capturing them for concentration and death camps.

It is important to note that these meetings are a big part of the Olympic history within the U.S., however, given that this is a biopic about Jesse Owens, it seems out of place to even address this in the film. This is a film about Jesse Owens. A better use of the cinematic time would have been to show the audience more of Jesse’s personality and the relationship he had with his family and his wife Ruth (Shanice Banton). Unfortunately, we only get to glimpse the man at the height of his career with the film barely addressing what happened after he placed his four record-breaking gold medals on his mantel. Despite all of the records he set and the gold medals he brought home to the United States, Jesse still had to endure racism as just another black man.

James as Jesse is a breakout star, but one can’t help but wonder if better direction would have shown the audience more of Jesse Owens as James sees him. We still don’t have an idea of Jesse’s true personality. We see a young man in love with his school sweetheart and mother of his child. We see the determination he has to pursue his dreams. We also see that he can be a little flip-mouthed when it comes to racist white men. But, we, the audience, missed out on who Jesse really, truly is when he’s not running extremely fast on a track.

Jeremy Irons gives a rousing performance as Avery Brundage, the wealthy real estate tycoon the U.S. Olympic Committee hand picks to be an emissary in Berlin to implore the Nazis to stop their activities while the Olympic Games are hosted in their country. Brundage is also a representation of part of the problem, at first. Brundage chooses not to see that Nazi-occupied Germany and its propaganda are keeping good athletes from competing because they are Jewish. After one visit, Brundage is convinced that the U.S. should still participate in the Berlin Olympics.

Sudeikis taps into his serious side as Jesse’s coach, surrogate father, and friend. William Hurt plays Jeremiah Mahoney, a member of the U.S. Olympic Committee totally against sending American athletes to Berlin (even if it’s for the Olympics). Carice Van Houten shows another side of herself as Leni Riefenstahl, a filmmaker tasked with making a film based on the Olympic Games. In the film, Leni butts heads with Minister Goebbels, who has direct access to Fuhrer Hitler and seems to share Hitler’s belief system.

Keep in mind this latest biopic, is not just about the races that Jesse’s won, but the race relations that he had to encounter in America and in Berlin. It’s also a cinematic snippet of Jesse’s short-lived turn as the “Fastest Man in the World” and his big win in Berlin. It’s a good starting point for the younger generation to get to know the man for themselves.