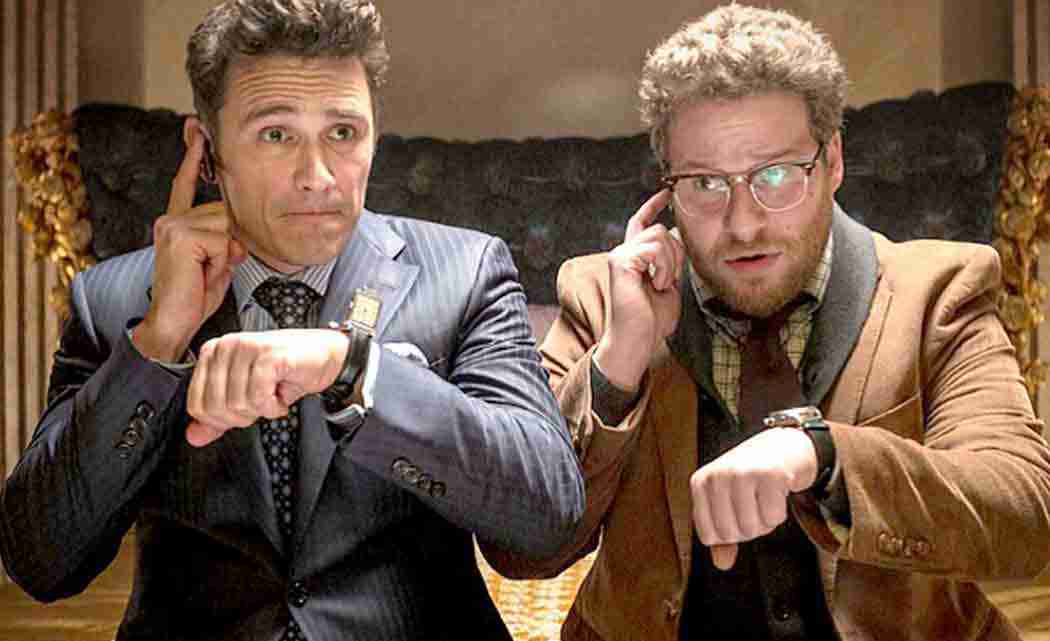 The Interview will go down as the satire that provoked an authoritarian dictatorship, roiled Sony Pictures in a massive hacking attack and prompted new questions of cyber warfare, corporate self-censorship and comedic audacity.

The movie is already assured of cinematic infamy, regardless of its merits. But is it any good?

Though The Interview, directed by Seth Rogen and Evan Goldberg, never quite manages the duo’s calibrated blend of sincerity and over-the-top crudeness, it nevertheless usually pulses with an unpredictable absurdity and can-you-believe-we’re-doing-this glee. Its greatest charm is that it so happily brings the silliest, most ludicrous of knives (a preening James Franco, lots of butt jokes) to North Korea’s militarized gunfight.

Rogen plays Aaron Rapoport, a journalism-school grad who has found himself, ignobly, producing an Extra!-like entertainment news show, Skylark Tonight, hosted by his friend Dave Skylark (Franco). The show traffics in the fluff of celebrity with occasional scoops. (Eminem makes a funny cameo as himself with the out-of-the-blue confession that he’s gay.)

When it’s learned that North Korea leader Kim Jong Un is a fan of the show, they maneuver to land an interview for a kind of modern “Frost/Nixon” televised tete-a-tete, albeit one with the same penchant for ascots. (Franco’s Skylark is an extreme dandy who speaks largely in over-used slang and has a strange obsession with Lord of the Rings.)

Before their trip to Pyongyang, a CIA agent (Lizzy Caplan) recruits the pair with the mission to turn their big interview into an assassination. “Take him out,” she instructs before putting them through training.

Like another comedy about the wrong Americans sent overseas, Bill Murray’s Stripes, The Interview is better on American soil and on less sure footing once it lands in North Korea. This is partly logistical. Though The Interview obviously couldn’t have shot on location and had limited images to draw on for its sets, the movie fails to create even a half-plausible North Korean atmosphere and is left claustrophobically meandering almost entirely in palace interiors.

Their first meeting with Kim (Randall Park) isn’t a regal pageant; he just knocks softly on Skylark’s door and eagerly introduces himself as a “huge fan.” Park is exceptional: His Kim is more complex than the broad caricature you’d expect. He’s a jovial young leader haunted by daddy issues, having been called soft by his father for adoring American pop culture. He’s a surprisingly agile basketball player and a lover of Katy Perry songs.

Even in North Korea, Rogen and company are more at home in American pop: Western civilization is more the target of The Interview than the DPRK.

As Skylark’s interview nears, their assassination attempts fail and ethical quandaries mount. Skylark and Kim (“a cool guy,” pleads Skylark) become fast friends, palling around together and shooting off tanks: The bromance has gone nuclear. If anything, the film, written by Dan Sterling from the story by Goldberg and Rogen (their second time directing after the better This Is the End), verges on making Kim too likable.

And while the movie leads to a fiery end and a slow reveal of the famine Kim inflicts on his people, most who see The Interview will say to themselves: THIS is what prompted an international incident? There’s nothing scandalous about The Interview, unless you happen to believe Kim is a god who rides around on unicorns.

Despite the large presence of Park’s dictator, this is really Franco’s movie. Seemingly energized by his more outlandish performances, he’s here in full, grinning Jerry Lewis-mode, a rubber-faced infotainment parody. His chemistry with Rogen is predictably solid.

Charlie Chaplin, Ernst Lubitsch and the South Park guys have all tried before to find comedy in the shadow of evil and thereby do a little to disarm it. The Interview struggles to really illuminate anything about the stranger-than-fiction Orwellian nightmare that is North Korea, but its attempt is admirable.

And, yes, having your film almost taken down by a totalitarian regime wins you an extra star.