SHAQ COMING BACK TO MIAMI TO PLAY: MUSIC 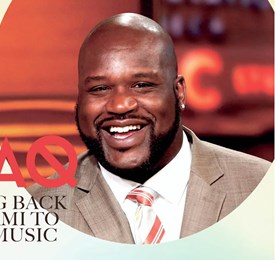 MIAMI, Fla. – Shaquille O’Neal is coming back to play in Miami.

Play music, that is.

The former star center and four-time NBA champion still has a hectic life in retirement, with work as a television analyst and celebrity endorser and other off-court business interests.

He’s also serious about music and will be one of the headliners during the upcoming Miami Music Week – bringing his “Shaq’s Fun House” and DJ skills back on March 29.

“Performing to me is my Game 7,” O’Neal said in an interview with The Associated Press.

“Game 7, down by one, the city needs you, everybody needs you, the crowd’s going crazy. When you do these music festivals, the kids, they come to do two things – relieve stress and have a great time. Sports and music relieve stress, and I happen to dominate both.”

O’Neal has studied the art of being a DJ for some time, even going back to his days with the Miami Heat and helping that franchise win its first world title in 2006.

His first “Fun House” was in Miami last year, also part of what organizers call the biggest week for dance music in the world. He also had a show as part of Super Bowl week earlier this year.

He’s not the only performer at the Fun House: O’Neal handpicks top DJs from around the world, has celebrity guests and promises other surprises. Yet he knows that on these nights he’s the star attraction – and embraces that people still want to see him perform.

“There’s really no pressure,” O’Neal said. “I was taught since an early age, if people pay to see you perform, just give them a show. When it comes to playing music, you just have to pick the right songs the kids can groove to. Give them some new stuff, give them some old stuff.

“And when I get up there and I see the bouncing, I just go into the zone. Music and sports are the only things that get me into that zone.”