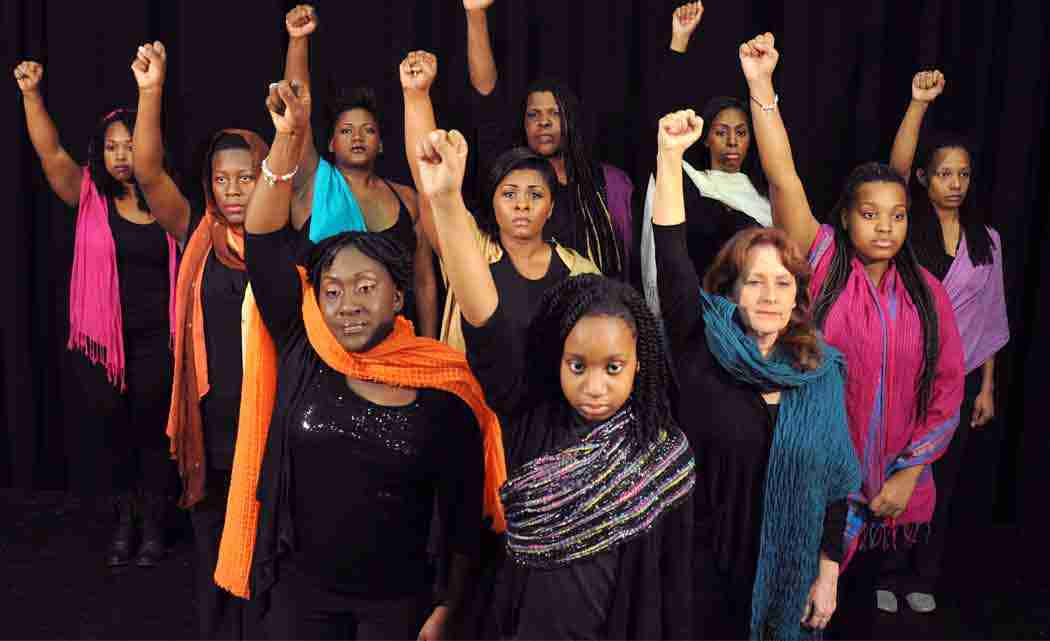 REFLECTION OF SISTERHOOD: The cast of Sisters! pose for the camera. The play runs March 6-8 at the African Heritage Cultural Arts Center in Liberty City.

MIAMI — Six years ago, the African American Performing Arts Cultural Theatre (AAPACT) opened its all-female cast revue of Sisters! A Celebration of the Human Spirit and South Florida Times was there to capture the excitement.

A lot has changed since 2009.  Immigration reform is a hot-button issue in Congress.  #Ferguson, the phrase “I can’t breathe,” and the terror group ISIS/ISIL are part of pop culture.  However, the themes and struggles that existed back then are still quite prevalent today, which makes a play like Sisters! more timely than ever.

“This play displays the strength, love, joy and tragedy of black women in the 1800s and is an eye-opener for women and men today,” said Teddy Harrell Jr., CEO and co-founder of AAPACT. “In retrospect of today, with the domestic abuse of women in our own country remaining a problem, plays like Sisters! shed some light and much-needed awareness.”

Sisters! is on limited engagement this weekend at the African Heritage Cultural Arts Center, 6161 NW 22nd Ave. in Liberty City.

Sisters!, the play, was written by Jerry Ayers, and is based on the 1984 children’s book We are Your Sisters by Dorothy Sterling.  The play weaves true accounts of the struggle of African-American women in the 19th century, and tells of personal struggles endured by black women back then and now.

“Reading the script, I immediately connected to knowing the struggle of the women that came before us  and then seeing how much of their struggle parallels things that we go through today,” said Rachel Finley, who returns as director. “The idea was this [was a] collective movement that propelled them forward, and how they got through it out of a desire to have [something] better for their children.”

Born from a place where sisterhood was key to surviving the times, Sisters! links together stories of women who bonded over good, bad and ugly. With a new cast, Finley decided to go a different route for this year’s revival.  The costumes and sets have been revamped and Finley has included additional multi-media formats to bring sharper focus to each vignette.

In a time when women are making strides in their careers and family, it seems like much has changed since the turn of the 19th century.  However, some things never change.  One character explores the struggles of being a single mother, not just because she has to raise her child without the help of a man, but also because she has to deal with being ostracized by her peers.  In Finley’s opinion, that hasn’t changed much, even though it should. Life is complicated.  We should accept certain things and people as they are.

“The story that probably hit home for me the most is the story that ends Act One: a woman is caught with her baby son in a riot and he dies,” said Finley, an award-winning poet who graduated from Carnegie Mellon University with a fine arts degree in the dramatic arts.  “The way that Ayers tells the story and the horror with so much strength really touched my heart and I know the audience will be moved, as well.”

As the world keeps turning and time continues to tick on, women are making more and more strides in today’s society.  Sisters! proves that together, women can achieve more and be more by having each other to lean on.  However, Sisters! is also a black community story in that all of the characters are black women who show that we, as a people, can become greater, as long as we stick together.

It is Finley’s hope that each audience member leaves the African Heritage Cultural Arts Center with “a deep respect for our past, optimism about our future, and gratitude for how far we’ve come.”

A Celebration of the Human Spirit

Previous post U.S. running out of room to store oil; price collapse next?