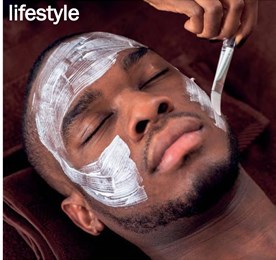 More men than ever are getting into the act. Some spas are seeing a 50-50 male-female split among guests.

Among other highlights at a recent spa show in New York City was the idea that more isn’t always the way to go. Some spas are slimming down their treatment menus to focus on customization.

One company, Kohler Waters Spas, offers mani-pedis that include a virtual reality experience.

The trend for men took off as long ago as 2017, when the association reported 49 percent of spa customers were men, up from 29 percent in 2005.

“They’re much more aware that it’s not just a thing I go to to get pampered,” Mersberger said. “It’s an actual lifestyle choice with benefits to my body, to my wellness. It’s part of my routine now. It’s not just about going for relaxation.”

A lot of hotels and spas are designing unisex bathrooms and locker rooms, Mersberger said. Women are usually fine with it, McNees said. They’re no longer dragging reluctant spouses to spas.

“We’re seeing a lot of groups and parties and different special events in the spa with both men and women,” she said.

Next post Healthy breakfast ON A BUSY SCHOOL MORNING? NOT SO HARD