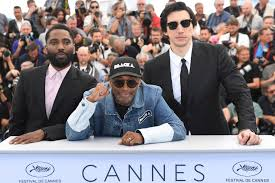 Spike Lee’s “BlacKkKlansman,” the highest profile American film in competition at Cannes, was awarded the Grand Prix Prize. The film ignited the festival with its true tale of a black police detective who infiltrated the Ku Klux Klan. Lee connected the film to modern day with real footage from last year’s violent white supremacist march in Charlottesville, Virginia.

“I take this on the behalf of the People’s Republic of Brooklyn, New York,” said Lee, accepting his award.

Jury president Cate Blanchett said it’s “quintessentially about an American crisis.” Fellow juror Ava DuVernay praised her colleague’s movie as “startling and stunning” and saying she’s seen every one of Lee’s films. DuVernay found herself on the same flight back from the festival — and asked him to hold his new prize.

“Let me tell you a small Sunday story,” the “Selma” and “A Wrinkle in Time” director tweeted. “We happened to be on the same flight back to NYC. And I happened to ask to see his history-making Cannes Grand Prix Prize. And he happened to say yes. And then me and about 27 other passengers stood there and swooned and smiled. The End.”

She told “IndieWire,” “As an African American filmmaker, I was completely taken by the film,” she said. “I’ve imbibed every film he’s ever made. It was startling and stunning. But when I walked into the jury room, I decided to listen to my jury members. It was a robust dialogue… emotion and energy from these artists from all over the world.”

Lee burst on the movie scene in 1986 with his debut that is now a classic, “She’s Gotta Have It.” The film is the motivation for a Netflix series by the same name.

The outspoken director blasted President Trump during a press conference in Cannes.

“We have a guy in the White House — I’m not gonna say his f***ing name — who defined that moment not just for Americans but the world, and that motherf***er was given the chance to say we are about love, not hate. And that motherf***er did not denounce the motherf***ing Klan, the alt-right, and those Nazis motherf***ers. It was a defining moment, and he could have said to the world, not just the United States, that we were better than that.” He added, “We look to our leaders. They give us direction to make moral decisions.”

The movie’s ending includes actual footage of the protest in Charlottesville, as well as the president’s televised response. The scene includes video of the car that plowed through a crowd and killed counter-protester Heather Heyer. The director said he got permission from Heyer’s mother, Susan Bro, to use the disturbing footage.