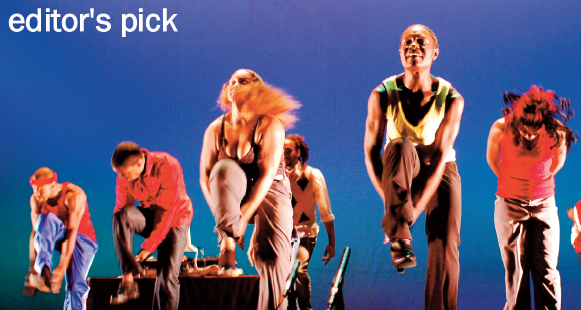 Miami, FL— Fans of movies like Drumline, School Daze and Stomp the Yard and TV shows like A Different World can enjoy a live performance of the dance routine often commonly known as stepping. The rhythmic showcase, often executed by fraternities and sororities, is on full display in Step Afrika!, the first professional company in the world dedicated to the tradition of stepping.

In its second appearance at South Miami-Dade Cultural Arts Center, Step Afrika! showcases the unique art form of “stepping,” which transforms the human body into a unique organic percussion instrument and simultaneously becomes a visual delight of rhythmic movement.

Step Afrika! has been compared to tap dance without shoes, or a band without instruments, using kicks, stomps, claps and chants – all linked to African and modern dance traditions.

“Electrifying talents! It is jazz, funk, rhythm and blues, and rap without instruments. Stepping is lean and mean,” said the Washington Post.

The universally appealing Step Afrika! promotes an appreciation for stepping and its use as an educational, motivational and healthy tool for young people. They accomplish this mission through arts education activities, international cultural exchange programs and performances world-wide. The company is also offering a free weekend dance workshop with members of Step Afrika! on Feb. 13.

Next post Obama will nominate Scalia successor 'in due time'