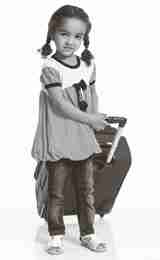 The familiar image of a little girl, suitcase packed and her favorite doll or stuffed animal tucked under her arm waiting is a heartbreaking image of a child unable and perhaps, unwilling to accept the truth. He said he was coming at 1:00, it is now six. Her grandmother cannot convince her to come back inside because the little girl is certain her father is going to show up. He is really going to show up – this time. This time turns into years of false promises and missed opportunities to develop a daddy/daughter relationship.

The little girl grows into a young woman who distrusts every man, mistakes small errors for gross negligence and her heart is turned cold to love; elements of Stacy Goldsmith-Ison’s play, Daddy’s Girl, playing for one day only on May 14 at 2:00 at the Plumosa School of the Arts, 2501 Seacrest Boulevard, Delray Beach.

“Lilly Davis is a bitter yet vibrant young woman living with culture of Old School music and free love,” Goldsmith-Ison said. unresolved anger and revelations that are destroying her happiness and relationships. Sparks fly, tempers flare, and emotions hit the fan when family members come together for Sunday Dinner at Aunt Claudia’s.”

Goldsmith-Ison said dealing with her own fatherlessness issues led to writing the play.

“While talking with some friends one day I made some very negative remarks about my father. Tracie suggested that I may have some unresolved issues concerning him. I replied that I was over that years ago. She suggested that maybe I was not! She encouraged me to write my feelings on paper and Daddy’s Girl was birthed.”

Goldsmith-Ison said she hopes Daddy’s Girl can help heal the pains of rejection and feeling unloved and undesirable. Her hope is also that the show will open the lines of communication and bring some restoration to families.

Daddy’s Girls kicks off a groundbreaking season in South Florida theatre where, for the first time, a collaboration of Christian authors partner for one season. Produced by Tracie Bonnick’s Moving4Word Productions, the season also includes Bonnick’s Pick Your Poison: Bad Girls of the Bible, Christine L. Ferguson’s, The Last Hope and E. Claudette Freeman’s Tears a Sister Cries. For ticket information and group sales, call 954-228-5536. Tickets may also be purchased online at http://www.eventbrite.com/e/realityunmasked-tickets-2183.