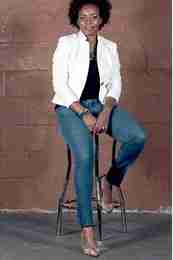 PEMBROKE PARK, Fla. – When she was only 9-years-old, Stacy Ann Rose knew she wanted to be an actress.

She was unaware, however, that one day she would play a role that would move women and girls to tears.

Rose portrays a neurologist named Dr. Robbins on HBO’s hit series, “Ballers.” Her character is representative of the everyday woman and gives young girls something realistic to aspire to.

“I didn’t even think about my role on ‘Ballers’ and how it would come across to some young black girls or girls of color,” Rose said. “I went somewhere and a woman was in tears. She said … to see me in ‘Ballers’ – just a regularly shaped, black woman with curly hair and my features are pretty regular for black women – she feels so encouraged and she finds empowerment for her daughter to say look, you can do that. Look at how beautiful she is. That was the furthest thing from my mind, but these are the little moments that I have along the way that make me say okay this is good, I have purpose here.”

It is those moments, combined with her Christian faith and values, which cause Rose to choose her roles very carefully.

“I have had to turn down my fair share of roles quite a few times. As a storyteller, an actor, I have to know who I am,” Rose said. “For me that means living the life that I’ve chosen. My religion is very important to me. My relationship with God is very important to me and that’s what keeps me centered and keeps me grounded so everything else comes after that. I have to be able to look at myself in the mirror and be happy.”

Playing Dr. Robbins – and the reaction she gets because of it – makes her happy.

“It’s just amazing that it’s being received that way. I’m so happy that I’ve been given the opportunity to represent us in this fashion. I’m so happy I’m able to bless people in that kind of way and give them encouragement,”

Rose said. “It’s just such an amazing opportunity to work with that crew and with the cast. … I’m really thankful that I’m still in the story line. ”

In addition to just wrapping Ballers’ third season, the South Florida resident – by way of Kingston, Jamaica – is an international radio personality, wife and mother of two.

which will hit the film festival circuit soon, and is starting her own company, Cielo Media.

“I’m now producing as well as acting. … That has been a really amazing process. Baptism by fire, a lot to learn, but it’s been extremely rewarding. We’re proud of the end result and we can only go up from there,” Rose said.

When asked how she manages it all, Rose said she has to abide by schedules.

“Naturally I’m a free-flowing, spontaneous, easy person, but life has forced me into schedules. That’s the only way I really get anything done,” Rose said.

She credits her Jamaican culture, upbringing and relocation to the United States as a teen with giving her diverse experiences that undergird her acting and work ethic. In fact, she said she often asks if her characters can be Jamaican.

“As an actor … it’s so important for us to have experiences … be exposed to different perspectives, different cultures and different thoughts because you’re able to bring those to bear on each character that you bring to life,”

Rose said. “Jamaican life in and of itself is so colorful and there’s so much texture and richness in that culture and … I’m so happy that it is a part of me and it gives me a unique perspective. … That drive to succeed for me is innately Jamaican.”

While Rose is willing to travel to auditions, she has no plans to relocate from South Florida any time soon.

“At this point, I don’t think I’d be willing to move my family … I think about my young children … The family structure I have here, the support I have here and I’d be taking them away from what’s comfortable,” Rose said.

mits sometimes she still has moments when she questions her chosen path, but said God affirms her through moments of illumination.

“It’s hard. It’s not easy at all but I am looking at that light at the end of the tunnel. You really have to know deep down inside of you that this is what you want to do for the rest of your life because there’s a lot of sacrifice to be made,” Rose said. “I feel like God is saying, ‘You’re in the right spot, keep going.’ It’s a bit of peace in the midst of this business. There’s quiet guidance, little lightbulbs that go off every now and again.”

She said she will use Cielo Media to produce content she is passionate about and lists Cate Blanchett, Viola Davis, Denzel Washington and Kevin Spacey among people she would love to work with.

“I would really get up early in the morning to get to those sets,” Rose said. “There are certain types of stories that I would like to tell. I love period pieces, those stories that talk about where we come from as a people and in general as a human race.”

She also has a heart as big as her talent.

“The tug on my heartstring now is more philanthropic than anything else. I think there’s so much need all over the world and we’re so privileged in this country,”

Rose said. “I’m privileged to do what I love to do and I just feel a pull to pour into the lives of those who are disenfranchised in one way or another.”

Her message to the masses: Don’t give up, prepare for success and be encouraged.

“We’re created on purpose for a purpose. Life gets hard and it gets really confusing, but we have to know that we’re not here by accident. It’s just a matter of not giving up. Tomorrow will be better. Keep pushing until you hit your moment,” Rose said.

Season 3 of “Ballers” premieres on July 23. While Rose can’t reveal much, she said her character does evolve this season.

“There is a slight evolution for her so I’m excited to see what the future holds for Dr. Robbins in the ‘Ballers’ world,” Rose said.