‘Can you dig it?’ Africa reality show draws youth to farming 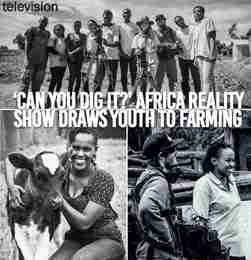 ‘Can you dig it?’ New farming reality TV show aims to bring young Africans back to the land.

NAIROBI, Kenya (AP) – As a student, Leah Wangari imagined a glamorous life as a globe-trotting flight attendant, not toiling in dirt and manure.

Born and raised in Kenya’s skyscraper-filled capital, Nairobi, the 28-year-old said farming had been the last thing on her mind. The decision to drop agriculture classes haunted her later, when her efforts in agribusiness investing while running a fashion venture failed.

Clueless, she made her way to an unusual new reality TV show, the first of its kind in Africa. “Don’t Lose the Plot,” backed by the U.S. government, trains contestants from Kenya and neighboring Tanzania and gives them plots to cultivate, with a prize worth $10,000 for the most productive. The goal: Prove to young people that agriculture can be fun and profitable.

“Being in reality TV was like the best feeling ever, like a dream come true for me,” Wangari said. But she found it exhausting. As callouses built up on her hands, her friends made bets that she wouldn’t succeed.

“Don’t Lose the Plot” is aimed at inspiring youth in East Africa to pursue agribusiness entrepreneurship. Producers said the show wants to demystify the barriers to starting a small business and challenge the prejudices against farming-related careers, even as many youths flee rural areas for urban ones.

“What we hope to achieve … is first to show people that you can make money out of farming, to change the age profile of farmers in Africa from 60 to the youth. And the next thing we want to do is to show farmers, young farmers, that they can use their mobile and technology in order to farm and achieve their goals,” producer Patricia Gichinga said. The show also offers training via online platforms and text message.

Attracting people to agriculture is no small challenge in Africa, where a booming young population is often put off by the image of punishing work and poor, weather-beaten farmers.

“Most young Africans think of farming as back-breaking labor that pays peanuts,” former Nigerian President Olusegun Obasanjo, the committee chair for the $100,000 annual Africa Food Prize and a farmer himself, wrote in the New African magazine last year. “This view, though largely inaccurate, is to some extent understandable.”

If Africa’s youth, who make up about 65 percent of the population, don’t venture into agribusiness, “then there is little chance that agriculture will have a transformative impact on the continent’s fortunes,” Obasanjo wrote.

Most experts agree that farming growth can boost African economies by increasing trade, creating more jobs and improving food self-sufficiency on a continent with the highest occurrence of food insecurity in the world.

But much of the potential remains untapped. Africa has over 60 percent of the world’s fertile but uncultivated land while importing $35 billion to $50 billion in food per year, the Alliance for the Green Revolution in Africa says . Weak or corrupt land governance is a challenge, as well as conflict.

Yields for major crops remain low compared to other regions of the world. Change must come by empowering the smallholder farmers who produce 80 percent of the food consumed on the continent, the organization says.

Now Wangari is one of them. After placing second in “Don’t Lose the Plot,” she became a full-time mushroom farmer.

In a damp structure of mud and clay on the outskirts of Nairobi, she has harvested her first crop and is preparing for her second. She had expected to make a $2,500 profit but took in $1,000 instead after mites from a nearby chicken house invaded and lowered her yield.

“When I see young men in the village now sitting idle I feel disappointed because there is a lot of idle land and they can use it to make ends meet,” she said. “They don’t require a lot of capital but they don’t have the information.”