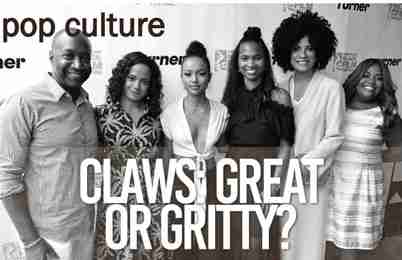 Now, I’m all for women’s empowerment and showcasing our many layers as nurturers, sexual beings and people of strength – and I love supporting women of color who are on the big and little screen. (I’ve been watching the latest Bachelorette because of Rachel Lindsey.) After all, I am myself a woman of color. I’m also a critic who tells it like it is.

That said, I have mixed feelings about the new TNT series “Claws,” which is executive produced by Rashida Jones. It’s about a voluptuous black woman named Desna (played by Niecy Nash) and her three best friends: fresh from the pen yet dripping in pearls and flowers Polly (Carrie Preston), salon muscle and Latina lesbian Quiet Ann (Judy Reyes) and equal opportunity Jen (Jenn Lyon).

All of these ladies work in Desna’s South Florida nail salon where they also launder money for the local drug gang, whose middle management boss happens to be Roller (Jack Kesy), Desna’s younger, white boyfriend.

During a panel discussion, the pilot episode after screened at the 21st Annual American Black Film Festival (ABFF), the show’s producer and co-writer Janine Sherman Barrois, Karrueche Tran (who plays newcomer to the nail tech crew Virginia) and Reyes spoke with Sherri Shepherd about the show. Barrois described the show’s characters as being unapologetic women of empowerment.

The premise of “Claws” sounds lowbrow. Then again, some good TV can be lowbrow, thought-provoking and mirror everyday life. It’s art imitating life at its finest. So, a premise like this should be a sure hit and Nash is in a way that no one has ever seen her before.

She’s tough. She’s giving. She’s the ringleader of a ragtag group of women who love just as hard as they throwpunches.

If only that were the only thing that sticks out about “Claws.”

“Claws,” which was directed by Nicole Kassell, is gritty.

There’s a strip club scene that just looks all kinds of wrong. And, some of the themes that ended up in the pilot seem to merely be there for shock value.

During the ABFF panel for the show, a Florida journalist asked Barrois about the naked portrayal of women in the pilot as sexual objects and if it was supposed to be indicative of the show’s South Florida setting.

She responded: “We are writing about women and their sexuality. Instead of turning our nose up at it, we see how they get out of it and how to never do it again. We are dealing with the underbelly here.”

In the pilot, Virginia (the youngest of the women) is introduced to the group and then clashes with said group of ladies. A former stripper, Virginia seems to be trying to do better for herself by working in Desna’s nail salon; despite having no talent as a nail artist.

So, yes, we get that there are women who start off in certain professions and aspire to be more. But, the way that the message is conveyed is still off-putting, making “Claws” seem more of an acquired taste.

That also said, Barrois and Eliot Laurence wrote a good pilot script. There’s a lot packed into the hour-long show. It begins with a nice introduction of the characters and ends with a doozy of an ending that makes me want to go back and watch more.

But, there’s another side of me that’s asking if I can enjoy the show despite the gritty, in-your-face drama that unfolds in much too vivid color that inundates the senses.

Since I’m still trying to figure out if “Claws” is worth my time and viewership, you may have to see for yourself on Sunday nights on TNT. Make sure to check local listing for more information.

Kimberly Grant can be reached at KAliciaG@aol.com.

Previous post Blacks should be proud to call ABFF their own