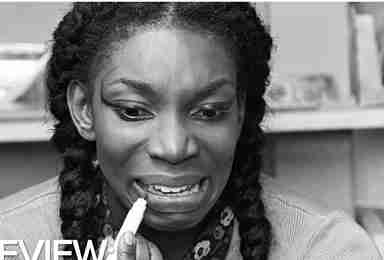 Michaela Coel is is brilliant as Tracey in the British Netflix series, “Chewing Gum.” Coel is also the writer and producer of the show.

Michaela Coel is a genius.

You’ve probably never heard of her and may not think that her existence is important, but you would be wrong. Not many people (especially young women of color) can write, produce and star in their own award-winning television series and not lose themselves in the melee or their minds.

As the sole writer of the U.K.’s Channel 4 raunch-com television series, “Chewing Gum,” Coel has somehow managed to produce a second season that’s more engaging than the first.

For all intents and purposes, “Chewing Gum” is a British version of “Awkward Black Girl” and “Girls” smashed together – on speed.

Coel plays fast-talking and super quirky Tracey, a 24-year-old young woman whose attempting to navigate adult life while still living with her mother and sister in a housing project in East London.

In season one, Tracey, an African born in London, has a plan to lose her virginity to her white boyfriend, Connor (played by Robert Lonsdale); which does not work out for her.

In the show’s second season, Tracey is still clumsily trying to navigate adult life as a virgin. Her mother’s strict upbringing causes her to seek new experiences in her quest for sexual liberation.

Now, “Chewing Gum” isn’t for those of you who don’t have an open mind or don’t get British humor. The show – which won Coel two British Academy of Film and Television (BAFTA) awards for Best Female Performance in a Comedy Programme and Breakthrough Talent in Writing – features a lot of sexual situations gone awry and the physical comedy prowess that is Coel’s performance as Tracey.

So, it’s not a show that the whole family can enjoy. Like “Girls” and “Insecure” on HBO, “Chewing Gum” is best left for after the kids have gone to bed.

What draws audience members to the show (both in the U.K. where the show is filmed and in the U.S.) is Tracey’s frankness about her sexuality and Coel’s need to put forth a character that doesn’t look like the conventional beauty.

Tracey, with her long, natural, braided hair, wide-set eyes and full lips, doesn’t look like the typical leading lady of an award-winning show. She looks akin to most every day, beautiful women who have melanin in their skin, great personalities and regular human quirks, like nosebleeds when she’s aroused.

Coel, who used to be a Pentecostal Christian practicing celibacy, also gives voice to young women who seek to keep their religious beliefs intact and grow up in today’s society. Cynthia and Joy are the ones who keep Tracey grounded in her religious beliefs, while Candice shows Tracey how to navigate life’s experiences.

It’s all a part of growing into adulthood when you don’t have things figured out. What’s so great about Coel is that she does all of this in just six, half-hour episodes every season. (It would be more, but the U.K. doesn’t have big budgets for television series like the United States.)

With season two of “Chewing Gum” upping the ante on raunch and maturing the beloved characters for the show, it’s hard not to crave a third season. Given that Coel will probably be writing that season alone as well, the wait will probably be long.

If Coel is taking suggestions, I would love to see Tracey conquer new territory in her life, like going back to school to learn a trade or earn a degree in something that she’s good at.

In the meantime, both seasons of “Chewing Gum” are now on Netflix for your viewing pleasure, where you can get a front row seat to a young, black woman whose becoming, not just a voice for her generation, but a rising star whose not afraid of doing the work to get the desired results.

So, in the words of the hardest working African-heritage woman in the U.K., “If you really want to do it, you’ll make it work.”

We’re standing with you, Michaela. Email Kim Grant at KAliciaG@aol.com.