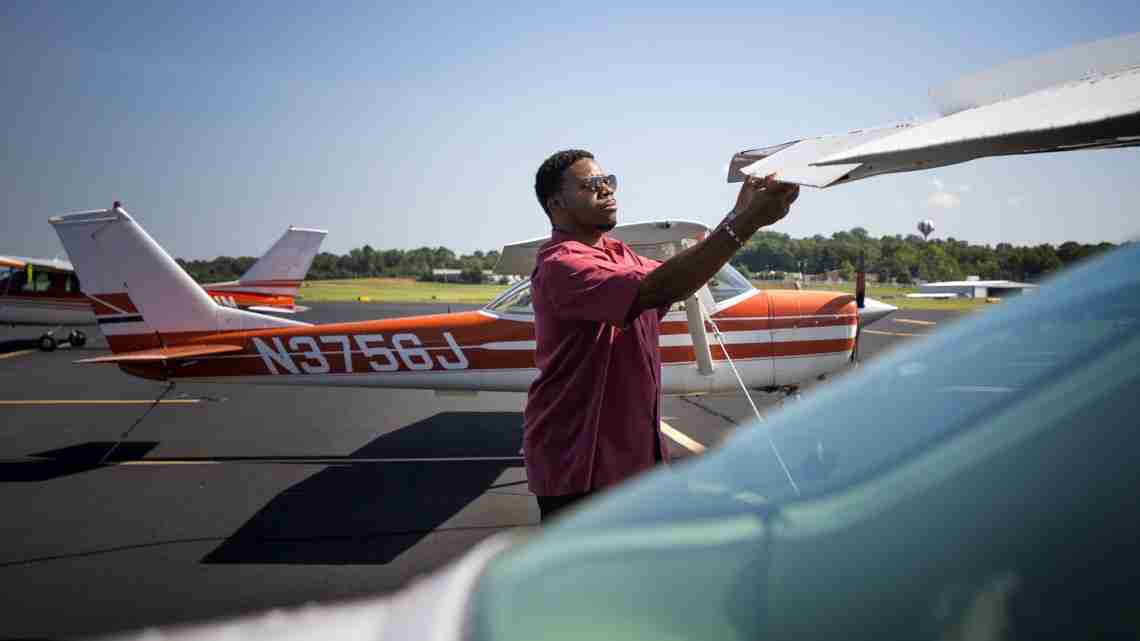 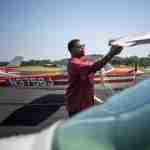 ADVANCE FOR SATURDAY, SEPT. 26, 2015, AT 12:01 A.M. EDT – Theron Burton, an IT business owner and pilot, checks the wings of his plane at the Greenville Downtown Airport in Greenville, S.C., Tuesday, Sept. 1, 2015. Burton and Greenville pilot Clint Thompson have launched an effort to create a network group of other minority pilots throughout the Southeast. (Mykal McEldowney/The Greenville News via AP) NO SALES; MANDATORY CREDIT

By ANGELIA DAVIS
GREENVILLE, S.C. (AP) -Theron Burton’s parents, Arie and Oscar, often told him that he could be anything he wanted to be.

Stay focused, work hard, put God first and the sky’s the limit, he recalls them saying.

Burton believes he took the latter literally by fulfilling a childhood dream of becoming a pilot.

Another dream he has is also beginning to take flight.

He and Greenville pilot Clint Thompson have launched an effort to create a network group of other minority pilots throughout the Southeast.

Being a black pilot or a minority is a rarity in a sense, said Burton, a Greenville resident and owner of Connect Electronic Business Solutions (EBS), an IT company.

Recent U.S. Department of Labor statistics show that in the aviation industry, 97 percent of pilots and flight engineers are white, 2 percent are black, 1 percent are Asian, and 3 percent identify their ethnicity as Hispanic or Latino.

“The main reason that I wanted to create this group was get minority pilots together where we would get to know each other and, together, get more involved in what’s going on with the aviation community,” said Burton, who is married to Tameka Burton.

He said he thinks it would be good if the group could gather to share experiences, knowledge and enjoy fellowship and camaraderie with one another.

But the intent of the group is not to exclude anyone, he said.

The group, which does not yet have a formal name, held its first meeting at the Greenville Downtown Airport.

While most of the 15 who attended were pilots, some were aircraft mechanics and aviation enthusiasts. Many were from the Upstate, while others came from Florida, North Carolina and other parts of South Carolina. The group expects to also draw members from Georgia.

Burton’s interest in flying began when he was a child, growing up in Abbeville.

He and his two older brothers worked on their neighbor’s farm each summer. One day, that neighbor, Buddy Ashley, offered to take the brothers for a ride in his small airplane, a Cessna 172.

Burton said the neighbor died likely never realizing the impact that one ride had on Burton’s life.

He’s been “kind of hooked” on airplanes ever since.

“I think it was that exposure,” he said. “I had a neighbor who was willing to take me up and show me something different, and I fell in love with it.”

He wishes that neighbor were still around so he could thank him and tell him that “something as small as taking me up in his airplane for 30 minutes made a big difference in my life.”

He hopes the new group of minority pilots can make a difference in the lives of other young people by bringing them to the airport and showing them what aviation is all about.

“If you can start when they’re young, showing them and having them experience different things, it makes a difference,” Burton said. “They’re more prone to find something they like early on.”

Burton was 12 when he knew he wanted to do something in the aviation industry.

Even when becoming a pilot wasn’t affordable as he got older, his interest never waned.

There were times when all he could do was go to the airport, look at the airplanes and watch them take off from the observation fence. He’d read about airplanes and found everything he could about them on the internet.

He even built himself a flight simulator to get a less expensive, but real feel for flying.

Burton found the reality of flying “kind of terrifying the first time.” Many times, as he was taking his flight lessons, he entertained thoughts of quitting.

“It’s difficult. It seems fun and cool, but it’s not easy,” he said. “Many times I wanted to give up, but if it’s something that you really like to do and it’s a passion, you’ll find a way to do it. I kept doing it. I kept forcing myself to fly.”

The thrill of successfully flying solo for the first time was worth everything he endured to get to that point, Burton said.

“I was so proud of myself and honestly, I was like, `I’ve piloted a plane. Now I can quit if I want to. I can say I flew an airplane and not have to go through all this stuff again and call it day,”’ he said. “That would’ve been the easy way out. But you’ve got to stick with it. That’s my thing in life.”

Burton said he went on to obtain his pilot’s license and owns a Cessna 182, which he flies sometimes for business but mostly for pleasure.

He was pre-flighting his airplane at the South Carolina Technology and Aviation Center, home of the old Donaldson Airport, when he met Thompson.

“That was the first time I saw another black pilot out on the airfield,” Burton said. “He actually came over and started talking with me. We exchanged numbers and I called him a couple of weeks later and said, `You know, we should get a group together.”’

Thompson called pilots he knew and they called others they knew. The group grew from there.

Burton recently learned that a man he sat next to at Allen Temple AME Church during worship service and shook hands with afterward had been an avid pilot since the 1950s.

Willie James Whittaker Jr. died recently, Burton said, “but I am sure if we had known that we both were into aviation, we would have had long conversations about it. That in itself made the creation of this group very important, so that we would know each other and be involved in the aviation community in general.”

Next post Confederate statue to be moved from downtown

Previous post What to do when good wheat goes bad