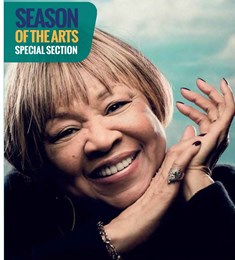 MIAMI, Fla. – If ever there was something for everyone, it’s among the 2019-2020 offerings at the Arsht Center for the Performing Arts of Miami-Dade County, one of the world’s leading performing arts organizations and venues, set in the heart of downtown Miami at N.E. 13th Street and Biscayne Boulevard.

The 14th Season of Broadway in Miami touts such new and enduring classics as “Hamilton,” Fiddler on the Roof,” “Miss Saigon,” Jesus Crist Superstar” and “Summer: The Donna Summer Musical.”

New shows range from “Ailey II” to “Star Wars the Empire Strikes Back” to “Bob Marley’s Three Little Birds.” Regarding the latter, “This jammin’ musical featuring the timeless music and lyrics of Bob Marley is based on the children’s book (Every Little Thing) by his daughter Cedella Marley,” says the center’s promo. “Bob Marley’s ‘Three Little Birds’ shares the legendary reggae artist’s message of peace and love with a new generation of songbirds.”

A major highlight of the upcoming season is the 14th Anniversary Benefit Concert featuring the legendary “Godmother of Soul,” Patti Labelle. Her one-night only performance is part of the center’s annual gala to support the center’s arts education and community outreach programs.

“Beautiful, simply does not describe the incomparable force known to the world as Patti Labelle. As time continues to evolve, the soulful songbird’s name has become synonymous with grace, style, elegance and class. … Having sold more than 50 million records, Patti Labelle has enjoyed one of the longest and most lauded careers in entertainment as a recording artist, actress and best-selling author.”

The breadth and depth of the center’s 2019-2020 season offerings continue with Jazz Roots. Again this year, the pioneering and critically-acclaimed concert series and educational program features a lineup of legends performing a fusion of jazz styles. Artists include the Branford Marsalis Quartet, Marvis Staples, Arturo Sandoval, the Image of Afro-Latin Jazz Orchestra and more.

Meanwhile, for the sixth year the Arsht UTIX program is offering $25 tickets for college students. Nearly 7,000 have registered from 40 universities. In addition, the center offers free tickets to performances as part of its free Family Fest and Free Gospel Sundays series, and discounted tickets to a wide variety of performances in partnership with cultureshockmiami.com.

No wonder that, in another sign of the season – and of a thriving cultural community – the Arsht Center’s ArtsLaunch2019 opening of the new arts season celebrated record-breaking attendance, with more than 9,000 people attending the Sept. 7 community event.

No surprise, then, that since opening in 2006, the Arsht Center, a 501C3 non-profit organization, has emerged as a leader in presenting innovative programming that mirrors South Florida’s diversity, as well as a catalyst for billions of dollars in new development in the downtown area.

Spotlighting legends and serving as a launch pad for local artists to make their mark on the international stage, the center presents nearly 400 events each year across its flexible, state-of-the-art performance spaces, as well as free programming for the community and an arts education program that serves nearly 60,000 children each year.