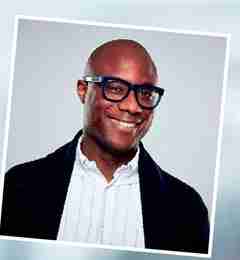 TOROnTO (AP) – Of the many who were moved by Barry Jenkins’ James Baldwin adaptation “if Beale Street Could Talk,” none was more shaken than the actor Brian Tyree Henry. “Get it together, Brian,” he told himself on the stage of the Princess of Wales Theatre moments after the film’s premiere at the Toronto international film festival

“Black love is beautiful,” he said, adding an expletive, to loud applause. “i don’t think i have ever seen it like that. Barry, you have no idea how badly we needed and yearned for this.” Jenkins’ follow-up to his best picture winning “Moonlight” was arguably the most anticipated film at Toronto. it’s the first big-screen adaptation of any novel by Baldwin and just the third film by 38-year-old filmmaker who was catapulted to larger renown by the astonishing “Moonlight,” a low-budget independent film that took center stage at last year’s Academy Awards.

Jenkins wrote the script to “if Beale Street Could Talk” the same time he scripted the adaptation of Tarell Alvin McCraney’s play “in Moonlight Black Boys Look Blue.” He did so without the rights to the novel, but later convinced the Baldwin estate to let him make the movie.

As i’ve gotten to know these people, we know that Baldwin’s words live in us – all that soaring, searing language, all that rage, all that passion, all that love that only Baldwin can write. Baldwin is the Shakespeare of our times.” Baldwin’s 1974 novel is about two young lovers in Harlem, Tish (newcomer Kiki Layne) and fonny (Stephan James), whose life together, just as it’s starting, is shattered by a racist police officer and a false accusation of rape. The film, bathed in the warm cinematography of James Laxton and the melancholy Miles Davis “Kind of Blue”-inspired horns of composer nicholas Britell (both of whom worked on “Moonlight,” too), radiates with the love between two and the sorrow of their unjust but not uncommon circumstance.

“We like to say there’s a Beale Street in every city,” said Jenkins before the screening. “There’s probably a Beale Street on the moon.” The moon reference was unwittingly ironic; Damien Chazelle’s neil Armstrong drama “first Man” had its first screening at Toronto right before the premiere of “Beale Street” – a quirky bit of scheduling that put back-to-back the famously intertwined Oscar favorites of 2017. (Chazelle directed “La La Land,” which was mistakenly announced as the best picture Oscar winner before Jenkins’ “Moonlight” was revealed as the actual winner.)

But while “Beale Street” was quickly added to this year’s lists of awards contenders, its premiere was all about the beauty and hardship of being black in America. Jenkins recalled, in the making of the film, channeling an experience he had in the midst of the post-Oscars “Moonlight” celebrations. When leaving the Governors Awards, the film academy’s after-party, and heading to a celebration for Justin Simien’s “Dear White People” (Jenkins directed an episode of the series), he overheard his driver refer to him with the nword.
“if it can happen to me with someone who’s driving me, a person in power, what do you think happens to some dude working a shift at the factory, or some dude walking down the block?” said Jenkins. “i felt this at the height of my public awareness, whatever. if it can happen to me, then it can happen to anyone and we’ve got to tell these damn stories.” “if Beale Street Could Talk” will be released by Annapurna Pictures on november 30.

Next post Popular Wynwood artist 'Nobody,' star of documentary