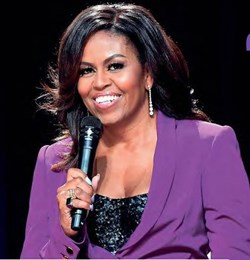 The appearance will mark Mrs. Obama’s first engagement at the festival and will include a sit-down interview on July 6 at the Louisiana Superdome.

Mrs. Obama also appeared on the December 2018 cover of “Essence” magazine and will contribute the monthly closing article – A Word – to the July/August issue.

The Essence Festival is a one-of-a-kind epicenter and celebration of global black culture with a focus on economic inclusion, cultural ownership and community development.

The festival now attracts more than 500,000 attendees and surpasses every national music, entertainment, and cultural festival based on average daily attendance.

“We are indescribably thrilled and honored to have ‘Forever First Lady’ Michelle Obama as a part of our 25th Anniversary Essence Festival, which will mark our most exciting and extensive programming to date,” said Michelle Ebanks, CEO of Essence Communications, the top media, technology and commerce company dedicated to Black women.

The 25th-anniversary festival will have its largest footprint ever, spanning more than 10 venues across New Orleans and encompassing several new and enhanced curated experiences.

A 25th anniversary celebration of 1994’s most culturally impactful and transformative albums that redefined pop culture will also be curated and performed by the original artists. These include Mary J. Blige’s “My Life,” Nas’ “Illmatic,” Brandy’s “Brandy,” Method Man’s “Tical,” Scarface’s “Diary,” Big Daddy Kane’s “Daddy’s Home,” Da Brat’s “Funkdafied,” Slick Rick’s “Behind Bars” and Brownstone’s “From the Bottom Up.”

For information about ticket sales, accommodations and the latest news about the Essence Festival® visit Essence.com/festival; follow on Twitter@essencefest #EssenceFest; become a fan of Festival on Facebook.