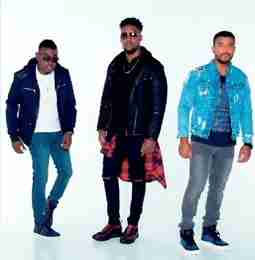 MiAMi – Many people dream of launching a music career. Some, like the Haitian Compas group, Harmonik, not only act on their dreams, but manage to establish longevity in an industry that is difficult to navigate.

Harmonik was created a decade ago when three talented musicians came together to establish a group of powerful singers who could write songs and dazzle audiences with live shows. MacD, nickenson and Sanders, also known as Harmonik, kicked off their tenth anniversary tour with a performance at Dimensions event Center in Naples, Florida.

“i can’t believe it’s already been 10 years. When we came out with our first album, we were just excited to be doing what we love – fast forward 10 years and we are still enjoying every second of it,” said front-man Mackendy Talon.

Harmonik has churned out some of the decade’s most popular Haitian Compas music. Albums like fan favorite “Jere’m,” as well as “Let’s Go, Diferan” and “Degage” boasted three breakout hits thus far. each album has produced some of Haiti’s most played and requested songs yet.

With several shows scheduled around the United States and after traveling throughout the summer, the trio takes the stage at Café iguanas alongside T-Vice and Olivier Duret on Sept. 21 before traveling to Massachusetts for a show with VayB at Wonderland Ballroom on Sept. 22. They’ll round out the month at new York’s famous S.O.B.’s on friday, Sept. 28.

“One of our favorite things has been seeing the fans sing our songs from start to finish and as we travel around the world it never ceases to surprise us how they keep showering us with love from everywhere,” said nickenson.

“When we go into the studio and record a song, we take our time trying to write lyrics that can connect with music lovers of all ages, and when we are on tour we are able to see the songs come alive – it’s one of the best feelings in the world,” said guitarist and singer Sanders.