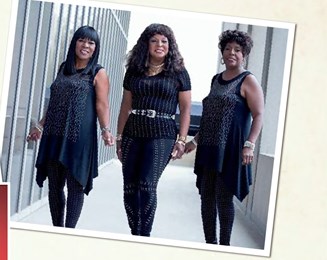 The show is open to all ages, with tickets starting at $25, and VIP tables available for $500 that include seating for four. Tickets can be purchased at magiccitycasino.com or by calling 844234-SHOW.

Rock and dance icon Chubby Checker kickstarted a dance revolution with the sensational anthem “The Twist.” His version reached the No. 1 Billboard spot in September 1960 and in January 1962, becoming the first and only song to attain that ranking in two different years. The record was inducted into The Recording Academy’s Grammy Hall of Fame in 2000. Checker’s other hits include the celebratory “Limbo Rock,” “Pony Time” and “The Fly.”

Motown vocalist Mary Wilson is a founding member of one of the world’s most famous female vocal trios: The Supremes. The group recorded 12 No. 1 hits from 1964 to 1969, including “Baby Love,” “Come See About Me,” “You Can’t Hurry Love” and the rousing “Stop! In the Name of Love.” Wilson was inducted into the Rock and Roll Hall of Fame in 1988.

Martha Reeves & The Vandellas scored more than a dozen hit singles, including “Jimmy Mack,” “Nowhere to Run,” “(Love Is Like a) Heat Wave” and their signature “Dancing In The Street.” “Heat Wave” became a phenomenon, selling more than a million copies and earning the group a Grammy Award nomination for best R&B vocal performance by a duo or group. In 1995, the trio was inducted into the Rock and Roll Hall of Fame.

The rare opportunity “to hear timeless golden hits performed live in one of South Florida’s premiere outdoor concert venues,” said Savin, “will bring a smile to your face and a swing to your hips.”

For other information visit magiccitycasino.com.