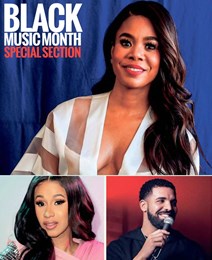 PHOTOS COURTESY OF PAGE SIX AND THE CUT

New York, NY (Black PR Wire) – Actress and comedian Regina Hall has been announced to host the 2019 “BET Awards,” to air live on Sunday, June 23 at 8 p.m. ET from the Microsoft Theater in Los Angeles, CA on BET.

Cardi B dominates this year’s nominations with a total of seven, including Best Female Hip-Hop Artist, Best Collaboration and Video of the Year, Album of the Year and the Coca-Cola Viewers’ Choice Award.

The nominations across 20 categories are selected by BET’s Voting Academy, comprised of fans and an esteemed group of entertainment professionals in the fields of television, film, music, social media, digital marketing, sports journalism, public relations, and the creative arts.

Nominated in this year’s “Best Actress” category, Hall takes the stage to host for the first time, joining the ranks of A-list entertainers who’ve hosted in years past, including Jamie Foxx, Leslie Jones, Anthony Anderson and Tracee Ellis Ross, Chris Rock and Mo’Nique.

A top actresses and renowned comedian, Hall is best known for her leading roles in “Girls Trip” and the internationally recognized “Scary Movie” film series.

Hall recently broke records when she was named the first African-American woman to win “Best Actress” by the New York Film Critics Circle for her role in “Support the Girls.”

Most recently she executive produced “Little” for Universal, and can currently be seen in Showtime’s “Black Monday.”

Up next, Hall will be seen in the Warner Bros. film “Shaft” opposite Samuel L. Jackson, Jessie T. Usher and Alexandra Shipp, set to release June 14.

This year’s “BET Awards” broadcast celebrates 19 years of showcasing the present and future of black entertainment while honoring the unsung heroes and icons of the past.

The 2019 “BET AWARDS” will simulcast live across seven Viacom networks in the U.S. including BET, BET HER, MTV, MTV 2, MTV Classic, VH1, and Logo.

Once again the four-day` BET Experience At L.A. Live (BETX), beginning June 20, will be filled with music concerts at The Novo by Microsoft and STAPLES Center; the BET Fan Fest at the Los Angeles Convention Center including seminars, celebrity basketball games, celebrity meet & greets, and other special interactive events. The weekend will be capped with the BET Awards on Sunday, June 23.

For the latest 2019 “BET Awards” news and updates, visit BET.com/Awards.