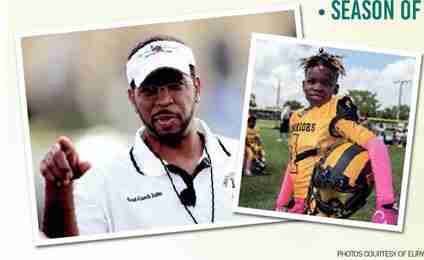 LOS AnGeLeS (AP) – There’s more new television to watch than is humanly possible. But everyone has to make a time-allocation decision in the end, and that’s what we’re here to help with.

Consider the list below a tip sheet to get you going on the fall TV season. each of the six shows has something of note to offer, and some have the potential to be season (or beyond) standouts. Happy viewing, and the snacks are on you.

The Starz documentary series has the power of fiction and beyond, delving into American lives rarely seen on TV.

While the twin football controversies of kneeling and concussions play out at a distance, the series provides intimate glimpses of Liberty City Warriors players on and off the field as they pursue the distant dream of a pro career and, more immediately, a winning season.

Their grit is impressive and touching, but it’s framed by the burdens of poverty, violence and lack of educational opportunities. Campbell’s program provides academic tutoring and tries to instill a work ethic that can serve beyond football, but who else is rooting for them?

The six-episode series , which debuted on Sept. 16, was directed by evan Rosenfeld, who had a powerful ally with LeBron James among its executive producers. “MURPHY BROWn”

The unexpected success of “Roseanne” last season (before its sudden implosion due to star Roseanne Barr) would be enough to make this revival intriguing as another onetime TV hit eager to prove its relevance.

The original CBS sitcom starring Candice Bergen as a broadcast TV news anchor and reporter was unabashedly in the middle of politics and social issues when it aired from 1988-98, including going toe-to-toe with Vice President Dan Quayle over unwed motherhood.

Creator Diane english has said it was the chance to weigh in on Trump-era politics that persuaded her to put Murphy back to work, this time on the cable news side and with a bone to pick about so-called “fake news.” She’s joined by her former colleagues including Corky (faith ford), frank (Joe Regalbuto) and Miles (Grant Shaud).

Do we sense a real-world Twitter storm gathering on the horizon? The show debuts 9:30 p.m.

“THe KiDS ARe ALRiGHT”

This comedy fits snugly into ABC’s ethnic family folio that includes “black-ish,” “The Goldbergs” and “fresh Off the Boat.” But the newcomer about a working-class, irishCatholic family in the 1970s isn’t riding anyone’s coattails: it’s sharply written, charming and boasts laugh-out-loud scenes.

Created by Tim Doyle, whose background mirrors that of the fictional Clearys, “The Kids Are Alright” gives the lovingly strict parents of eight (well-cast) sons their dignity as well as foibles as they navigate parenthood in a tumultuous decade.

Mary McCormack and Michael Cudlitz are actors best known for drama but shine as mom and dad, with McCormack getting the best punchlines in the debut episode and delivering them with aplomb. A sample: “We do not have the wherewithal in this family for any of you kids to be special.” Begins 8:30 p.m. eDT Tuesday, Oct. 16.