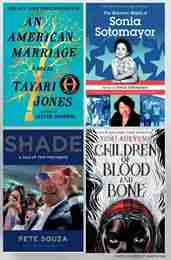 MiAMi – Book lovers rejoice! The Miami Book fair will be here in november with an exciting line-up of authors and literary events. novelist Tayari Jones’ “American Marriage” was one of Oprah’s picks. Jones will be at the fair on nov. 15.

The weekend street fair runs nov. 16-18 and will include an appearance by Supreme Court Justice Sonya Sotomayor, who will talk about three of her books for young readers: “The Beloved World of Sonya Sotomayor,” “Turning Pages: My Life Story” and its Spanish language translation “Pasanda Paginas.” She’ll be in conversation with former U.S. Poet Laureate Juan felipe Herrera. Scheduling details forthcoming.

The street fair will also feature hundreds of authors, including novelists Celeste ng (“Little fires everywhere”), R.O. Kwon (“The incendiaries”), Jacqueline Woodson (“The Day You Begin” and “Harbor Me”), Michael Ondaatje (“Warlight”) and Curtis Sittenfeld (“You Think it, i’ll Say it”). nonfiction authors include nPR’s Peter Sagal of “Wait, Wait, Don’t Tell Me” fame and his book of essays “The incomplete Book of Running.” The times and dates of the weekend sessions aren’t set yet.

Also attending will be director, producer, and actress Justine Bateman. “The family Ties” star is the author of a new nonfiction book on the title topic, fame.

Tomi Adeyemi is a relatively new name to the lit scene. Her first book, “Children of Blood and Bone,” a fantasy novel about a girl who fights a monarchy in West Africa to return magic to her people, has earned critical accolades and widespread popularity since it debuted at number one on the new York Times’ Young Adult Hardcover best-sellers list. The book is part of a trilogy, so there’s more goodness to come. Author of the Pushcart Prize-winning debut “everything i never Told You,” Celeste ng, is back with her second novel, “Little fires everywhere.”

Also, feminist writer Rebecca Traister from “The Cut,” is back with another book about American women, “Good and Mad: How Women’s Anger is Reshaping America.”
HIGHLIGHTS FROM THE 2018 MIAMI BOOK FAIR SCHEDULE INCLUDE:

Monday, nov. 12: Anna Quindlen, “Alternate Side: A novel” (purchase of the book required for two tickets)

friday, nov. 16: An evening with the national Book Award winners and finalists, an event at which you get to see writers of nonfiction, fiction, young adult works and poetry.