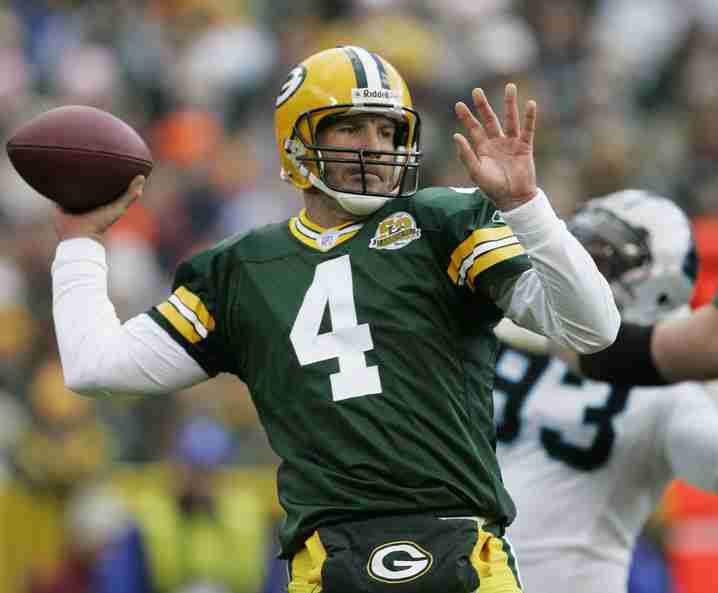 Now if his receivers were back in their prime, ol’ No. 4 might have had a few more completions Sunday at his charity flag football game.

It was all just for fun, of course. There are no more NFL comebacks for the 45-year-old quarterback.

It was the culmination of a momentous weekend back in Wisconsin for Favre. He returned to Green Bay to have his jersey retired by the Packers on Saturday, the same night he was inducted into the franchise’s Hall of Fame.

The event marked the emotional end to a long reconciliation between Favre and the Packers. Sunday was all about having fun at Camp Randall Stadium on the University of Wisconsin campus.

“Obviously we were not here to watch stellar football, but it was really awesome to be back with the guys,” Favre said after the game at midfield.

Tired from a busy weekend, Favre was ready to return home to Mississippi and relax.

“I have to admit, I’m worn out just from the emotions,” Favre said. “Yesterday was absolutely amazing, and then to get out here and have a little fun with the guys, relive some old days and good times _ it was a lot of fun.”

Known for his gunslinger approach, Favre didn’t waste time showing off his right arm. On his first snap, Favre pumped right, then threw a deep pass about 30 yards to his left that fell out of reach of former teammate Javon Walker.

Later in the drive, on fourth-and-19, Favre threw a bullet of a pass that bounced off the hands of receiver Antonio Freeman.

“I had to get adjusted to catching that Brett Favre fastball again. It was amazing,” said Freeman, dripping with sweat on a sunny afternoon.

When his defense was on the field, Favre spent time laughing and catching up with former teammates such as running back Dorsey Levens on the sideline. The two connected on a roughly 40-yard catch-and-run for a score for Levens.

Just like nearly two decades ago, Favre celebrated with Andre Rison, the two jumping into each other to bump shoulders. Favre, Levens, Freeman and Rison were teammates on the 1996 Packers team that won the Super Bowl.

Many of those teammates were at Lambeau on Saturday and witnessed an overwhelmingly warm reception for Favre from the Packers faithful.

“I think it made him a little at peace to come back and to get it done,” said Favre’s brother, Scott, who also played in the flag football game. “There’s been that little feeling in there of animosity, people think, on both sides _ but coming back I think it eased him a little bit.”

About the only thing that could have made the weekend even better for Favre was if the game was at Lambeau. Organizers have said that a scheduling conflict and the proximity to the start of training camp in less than two weeks prevented that stadium from being used.

Next post Remains of victims of Nazi experiments found in France