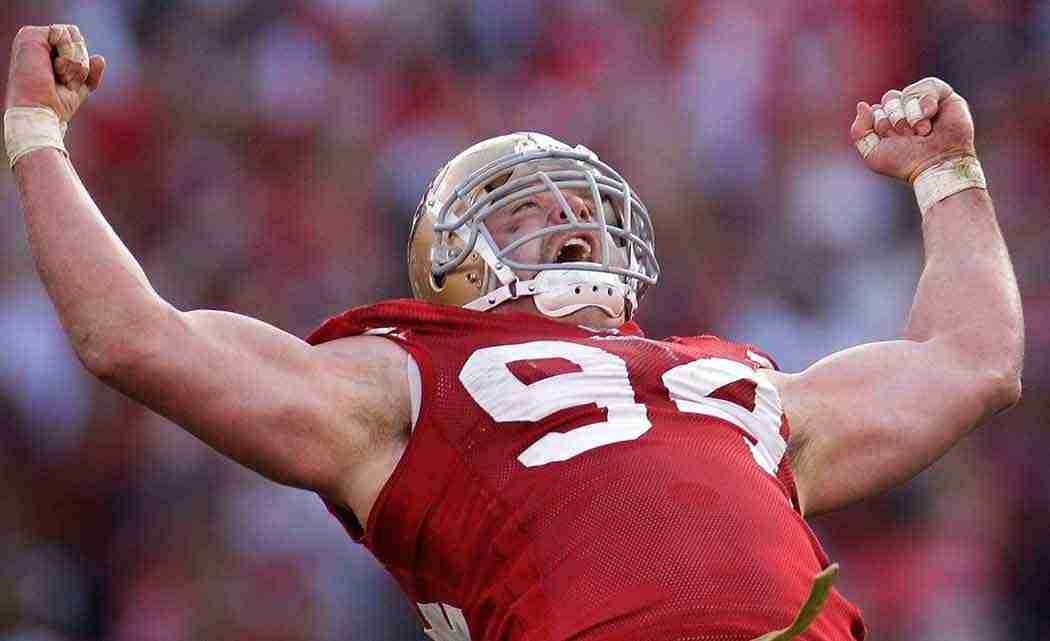 SANTA CLARA, Calif. (AP) _ When Justin Smith decided that his body wouldn’t let him perform up to his own lofty standards, he knew it was time to stop playing.

Smith announced Monday that he is retiring after 14 seasons as one of the top defensive linemen in the NFL, dealing yet another blow to the San Francisco 49ers in a rough offseason.

One of the most durable players at one of the most physically demanding positions, Smith had been hampered the past two seasons by a bum left shoulder that he first hurt in training camp in 2013.

That shoulder absorbed the brunt of the punishment as a right defensive end going up against 300-pound linemen all game and Smith did not feel up to playing another season.

While Smith could still be an effective player, he could no longer be the dominant one he had been for so long in his career and that’s what led to his decision.

“People are going to compare him to everybody else,’’ coach Jim Tomsula said. “Justin Smith doesn’t compare himself to anybody else. He compares himself to himself. That’s the bar he sets. … I’ve always known with Justin that if he didn’t feel like health-wise he can play at the level he plays at, he’s not going to do it.’’

Smith had just two sacks in the final 14 games last season as his practice time, snap count and effectiveness dwindled toward the end of the season.

Smith played 14 seasons in the NFL after being drafted in the first round by Cincinnati in 2001. After seven successful seasons with the Bengals, he signed as a free agent in San Francisco and had his best success in seven years with the 49ers.

Smith was the anchor of San Francisco’s 3-4 defense that made three straight trips to the NFC title game from 2011-13 and one Super Bowl appearance. He tied up blockers and broke down protection to help the team’s stellar linebacker corps of Willis, Navorro Bowman and Aldon Smith succeed.

While Smith never recorded double-digit sacks in a season in his career, he was so well-regarded that he was selected as an All Pro first-team defensive tackle and second-team defensive end in 2011. He was the first player ever to make the AP’s first and second team at different positions.

“Justin is the consummate professional whose impact on this organization can never be measured by statistics alone,’’ 49ers general manager Trent Baalke said. “His durability, competitiveness, work ethic, strength and rare stamina helped set him apart over his 14-year career. Cowboy will go down as one of the best to ever wear a 49ers uniform and his candidness, work ethic and pure passion for the game will be missed.’’

Smith also was picked as a second-team All Pro defensive end and defensive tackle in 2012 and made five Pro Bowls in his seven seasons in San Francisco.

During his career, Smith started 217 of 221 games played, including a streak of 185 consecutive starts from his rookie season through December 2012. He finished his career with 1,370 tackles, 87 sacks, 16 forced fumbles, 10 fumble recoveries, three interceptions and 30 passes defensed.

Smith posted at least 5.0 sacks in 12 of his 14 seasons played and is one of 13 players to register 5 or more sacks in at least 12 seasons since sacks became an official statistic in 1982.

“Whether it was chasing down a wide receiver and forcing a fumble to seal a win, or driving a tackle back into the quarterback’s chest, he gave everything he had every play,’’ 49ers CEO Jed York said. “Justin has earned the respect of the entire NFL community and he will always be remembered as one of the 49ers all-time greats.’’

Previous post ‘Sunshine State’ or not, Florida badly behind on solar power