A special moment for United States at 2015 Presidents Cup 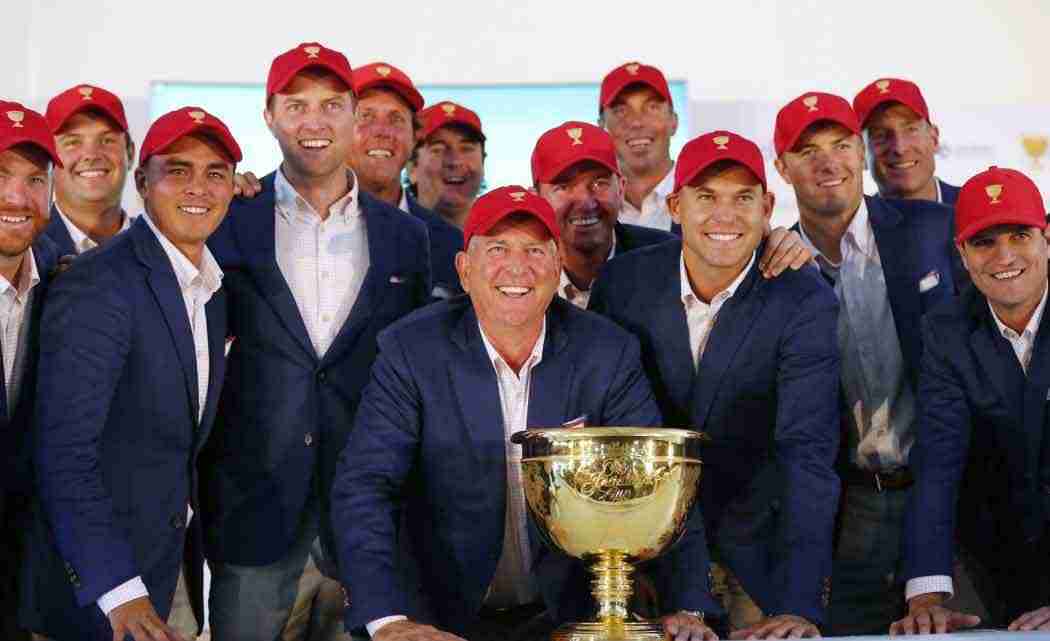 INCHEON, South Korea — Jay Haas took a deep breath, trying to calm nerves he had only ever felt on the golf course while playing. His U.S. team was one point away from winning the Presidents Cup, and the final match added another layer of emotion.

American victory depended on Bill Haas, who was much more than a captain’s pick.

He was the captain’s son.

And the kid came through, never missing a shot until a birdie putt was conceded on the last hole for a 2-up victory to capture the Presidents Cup.

“I was much more emotional, I think, than if it would have been anyone else on the team,” Jay Haas said. “But no less proud.”

The father refused to look at the moment as any measure of vindication, but the coincidence was too great to ignore. For it was 20 years ago when American hopes of claiming the Ryder Cup came down to Jay Haas on the final three holes at Oak Hill.

Phil Mickelson, a Ryder Cup rookie, was handily winning the anchor match. That meant Haas had to halve his match with Philip Walton, and while he was 3 down with three to play, he holed a bunker shot on the 16th and won the 17th with a birdie. If he won the final hole, the Americans would keep the cup.

“It wasn’t pretty down the stretch there,” Haas said.

He popped up his 3-wood, punched back into the fairway, hit a wedge shot that spun off to the collar of the green and missed his par putt. Walton lagged his par putt near the hole, and the European celebration was on.

Those memories came back Sunday at the Jack Nicklaus Golf Club Korea for a different cup that meant just as much for different reasons.

“I thought, ‘That’s 20 years ago.’ And Bill was there watching me play,” Haas said. “I’ve told the story many times that I wish I would have just gotten up on the 18th hole and swung as hard as I could, like I was in a driving contest, and maybe hit a better shot. He’s heard me say that.”

Bill Haas never looked cooler under so much pressure.

He knew on the 13th hole that the Presidents Cup would come down to his match, and he was clinging to a 1-up lead. The overall score was tied at 14 1/2 points. His was the last match on the course. The kid didn’t swing as hard as he could, but he didn’t miss.

Haas hit a 3-iron into the bone-chilling wind and onto the 16th green for a two-putt par, and Bae Sang-moon had to make a 10-foot par putt to halve the hole. Haas followed with a 6-iron on the green at the par-3 17th, and halved the hole with pars that assured no worse than a tie for him. After a perfect drive on the par-5 18th hole that features water down the right side and a bunker to the left, Haas narrowly missed the green and went into a bunker, a safe place to be.

He never had to make the birdie putt when Bae stubbed a chip, then chipped again and conceded the match.

“That was the hardest position I’ve felt on the golf course in my career,” he said.

He was gutted for Bae, who faced the pressure of a home crowd in Korea and showed it when he fell to the ground and covered his face after the chip. It wasn’t long before Haas was getting choked up when asked about being picked by his father, inserted into the final match and delivering the winning point.

The son remembers Oak Hill, too.

He was 13 and growing up in North Carolina, where he played some golf but really loved basketball. It was that afternoon at the Ryder Cup that changed everything.

“The day I thought I wanted to play golf like he did was at that Ryder Cup,” Haas said. “I remember hearing the cheers. He holed out a bunker shot on 16, birdied 17 to go to 18, and if halved the match, the match behind him would have won it. His match ended it.”

What stuck with the boy was the opportunity, not the outcome.

“And to happen in a similar way for me … that was the most pressure I ever felt in a team event.”

That goes for his father, too, who walked away as a winner after watching his son thrive in a situation the captain knew all too well.

“For him to do that down the stretch is not vindication or anything like that, but just how things work out. And 20 years went by in a blink,” Jay Haas said.

He paused briefly and smiled.

“Glad it worked out,” he said.

Next post Malala is a gripping, eloquently told story

Previous post Grieving the loss of loved ones, a necessary part of healing process