A win, then a hug: Serena Williams tops Venus at Wimbledon 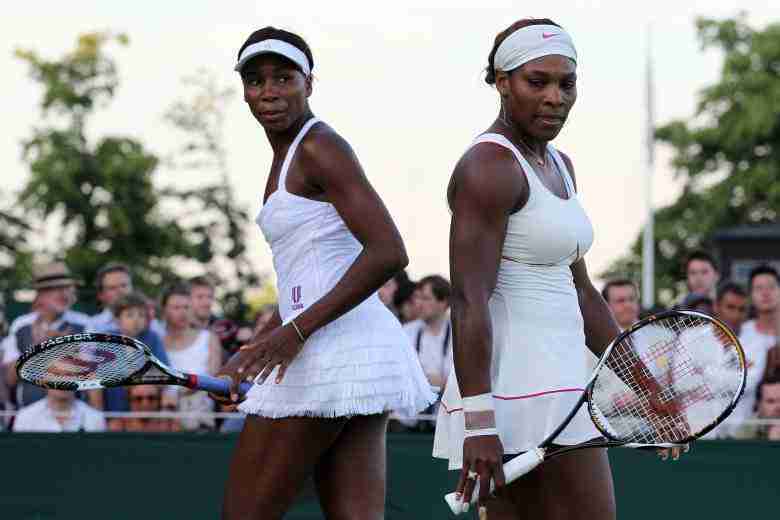 LONDON (AP) _ Decades ago, when the Williams sisters were kids in California, taking tennis lessons from Dad on a municipal court and imagining playing at Grand Slam tournaments one day, it was Venus _ older, taller, stronger _ who usually beat Serena.

Never a fan of losing to her sibling _ who would be? _ Serena cheated a tad every so often, lying about whether Venus’ shots landed in or out.

“That’s the past,” Serena jokes now with an eye roll. “I was young.”

As professionals, on the sport’s biggest stages, Serena has been better, especially lately. On Monday at Centre Court, in the 26th all-Williams contest on tour but first at a major in six years, No. 1-seeded Serena played solidly enough to beat No. 16 Venus 6-4, 6-3 and reach the Wimbledon quarterfinals, closing in on third leg of a calendar-year Grand Slam.

This matchup between five-time champions at the All England Club was one-sided, done in 68 minutes. It’s Serena’s sixth win in the last seven matches against Venus, part of a 15-11 edge overall. When it ended, Serena walked calmly, quietly _ none of her customary “Come on!” exuberance _ to envelop Venus in a long hug.

On Serena’s mind, it turns out, was this question: How many installments are left in this one-of-a-kind sibling rivalry?

“I just thought, `Wow, I’m 33, and she just turned 35. I don’t know how many more moments like this we’ll have.’ I plan on playing for years, but you never know if we’ll have the opportunity to face each other,” Serena said after they walked off court with matching red racket bags. “I just took the moment in, and I thought, `We’re at Wimbledon.’ I remember when I was 8 years old, we dreamed of this moment, and it was kind of surreal.”

Venus’ take on the likelihood of future meetings?

“When that moment is over, it will be over,” she said, shrugging her shoulders. “It’s not now.”

Serena, 36-1 this season, has won 25 Grand Slam matches in a row. Get past former No. 1 Victoria Azarenka on Tuesday, then win twice more, and she would complete a self-styled “Serena Slam” of four consecutive major championships, something she also did in 2002-03.

Looking further ahead, Serena could go to the U.S. Open with a chance at the first true Grand Slam _ four majors in a single season _ since Steffi Graf in 1988.

When a reporter made a passing reference to that, Serena rested her chin on her left hand and declared: “I no longer answer questions about Grand Slams.”

Into Wednesday’s men’s quarterfinals: Andy Murray against Vasek Pospisil, and Stan Wawrinka against Richard Gasquet. Novak Djokovic and Roger Federer were among those in fourth-round action later Monday.

Until Monday, Venus hadn’t dropped a set and was aiming for her first Wimbledon quarterfinal since 2010. But Serena won Monday’s first eight points and wound up with 36 winners and 13 unforced errors.

“Very focused from the start. Very aggressive. That’s what she needed to do, because if you let Venus dictate, she is very, very, very dangerous,” said Serena’s coach, Patrick Mouratoglou. “No matter who is on the other side of the court, that’s Serena’s job _ to win. For Venus, also. But it’s not something easy or pleasant against each other.”

The Williams’ parents and other siblings weren’t in the guest box, where rapper Drake sat next to Serena’s agent, and singer John Legend and his wife, TV host Chrissy Teigen, sat behind Mouratoglou.

It took until the 15th point for Venus to register a winner. That’s also how long it took for a spectator to draw guffaws by shouting, “Come on, Williams!”

An opponent who, unlike most others, pounds serves at 121 mph, as she did Monday, and returns the 115 mph serves Venus hits.

Other foes, of course, didn’t grow up in the same home, didn’t learn the game from the same instructors, didn’t travel the world for years practicing with _ and playing doubles alongside _ each other.

“Boy, she has a game to just knock anyone’s socks off,” Serena said about Venus. “So you just have to be ready.”

Next post Big moves made, but dealing isn't done in NBA free agency