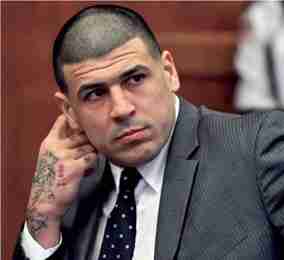 Aaron Hernandez appears during a hearing at Suffolk Superior Court.

FALL RIVER, Mass. (AP) – A judge on Tuesday erased a 2013 murder conviction against former NFL star Aaron Hernandez, ruling that case law in Massachusetts has long established that defendants who die before their appeals are heard should have their convictions vacated.

Lloyd’s mother fought back tears after the ruling Tuesday, saying the former New England Patriots tight end would always be guilty in the eyes of her family.

“In our book, he’s guilty, and he’s always going to be guilty,” Ursula Ward said during a news conference.

Prosecutors said they would appeal the ruling to the Massachusetts Supreme Judicial Court.

Lawyers for Hernandez had argued that the SJC had applied the legal doctrine “without exception,” even in cases of suicide. They said his conviction wasn’t considered final because the automatic appeal he was entitled to had not been heard.

He cited a report issued last week from the Department of Correction that said Hernandez told another inmate he had heard a “rumor” that if an inmate has an open appeal on his case and dies in prison, he will be acquitted.

Garsh said there may be “complex and myriad” reasons that Hernandez killed himself five days after he was acquitted in a 2012 double murder. She cited a report from prison officials that some inmates knew about a radio broadcast that speculated Hernandez may have been gay. She also said a “possible mental disturbance” was reflected in a suicide note to his fiancee in which he said his death was “the Supremes, the almightys (sic) plan, not mine.”

Lloyd’s mother has filed a wrongful- death lawsuit against Hernandez. Her attorney, Douglas Sheff, said he doesn’t believe the civil case will be undermined by the dismissal of Hernandez’s conviction.

An attorney in Hernandez’s criminal case filed court papers last month that said his estate is currently worth “zero.”
Sheff said the only identifiable assets he knows of are Hernandez’s house, valued at $1.3 million, and a Hummer. But he noted that a message Hernandez left for his fiancee said, in part: “You’re rich.”

“We don’t know what that refers to. We’d like to find out,” he said.

Representatives for the Patriots, the NFL and the NFL Players Association declined to comment on whether the team has any outstanding financial obligations to Hernandez or his estate.

Hernandez’s appellate attorney, John Thompson, told reporters he believes it’s still uncertain as to whether Hernandez took his own life. Thompson said he has recent correspondence from Hernandez in which he said he was interested in pursuing an appeal of his conviction.

State police said in an investigative report that Hernandez was found naked April 19 and hanging from a bed sheet tied around the window bars of his cell.

Correction officers found that cardboard had been shoved into the tracks of Hernandez’s cell door to prevent it from opening. Hernandez also had put shampoo on the floor to make it slippery, the report states.

An autopsy by the state medical examiner’s office determined the cause of death was asphyxia by hanging and the manner of death was suicide.

Hernandez, who grew up in Bristol, Connecticut, and played football at the University of Florida, was considered an up-and-coming star during his three seasons with the Patriots. He was cut from the team hours after his arrest in Lloyd’s killing.

“Despite the tragic ending to Aaron Hernandez’s life, he should not reap the legal benefits of an antiquated rule,” Quinn said.

The practice of posthumously vacating convictions is hotly debated. Some states have doctrines similar to Massachusetts case law that says convictions aren’t final until the merits of a defendant’s appeal have been decided. According to a 2013 Minnesota Supreme Court ruling, more than a dozen states allow appeals to go forward even after the defendant dies, and the conviction is only vacated if the appellate court finds that a new trial would have been warranted.