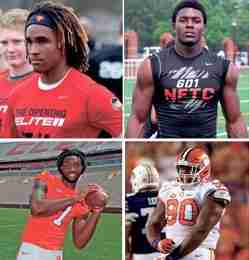 GLENDALE, Ariz. – As with any sequel, Alabama-Clemson II will have some new characters and fresh plot lines.

The top-ranked Crimson Tide and No. 3 Tigers will meet in Tampa, Florida, on Jan. 9 in the College Football Playoff national championship game. Last year they played a wild 45-40 game won by ’Bama. It gave Nick Saban a fourth national title with the Tide and fifth overall.

The rematch is a chance for Saban and Alabama to add to an already unprecedented run of four national championships in seven years. For Clemson coach Dabo Swinney, it is another opportunity to beat his beloved alma mater and snap a title drought for the Tigers that stretches back more than three decades.

Deshaun Watson is back. The Clemson quarterback was so good last season against the Tide that Saban was comparing him to Cam Newton.

O.J. Howard, the tight end who had a career game in last year’s final, returns for Alabama. Both teams once again feature fearsome defensive lines, even though some of the stars have changed. But there’s plenty new this time around:

Alabama’s Jalen Hurts is a victory away from becoming the first true freshman quarterback to lead a team to a national championship since Jamelle Holieway did it with Oklahoma in 1985. Last season Jake Coker was the Tide’s quarterback, a more conventional drop-back passer who threw for 335 yards on 16 completions, including five for 208 to Howard.

With Hurts, the Tide has become far more reliant on the quarterback running game. Hurts is still a work in progress in the passing game. He went 7 for 14 for 57 yards in Alabama’s 24-7 victory against Washington in the Peach Bowl on Saturday. He did run 19 times for 50 yards, and on the season he is up to 891 yards and 12 touchdowns.

Hurts is a more talented player than Coker, but if Alabama needs to trade scores with Clemson again, can the 18- year-old make the plays in the passing game that Coker did last year? Then again, Hurts’ mobility will come in handy against a Clemson pass rush that ranks right up there with Alabama’s.

Clemson’s top wide-receiver is 6-foot-3, 225 pounds and a few months away from becoming an NFL millionaire. He missed just about all of last season while recovering from a neck injury and returned this year to become Watson’s favorite target.

Alabama has NFL-caliber talent everywhere, of course, but Williams is a matchup nightmare even for good corners such as Marlon Humphrey and Anthony Averett. Williams had six catches for 96 yards against Ohio State in a 31-0 victory Saturday night. He has 90 receptions for 1,267 yards and 10 touchdowns on the season.

The Tigers will also add Deon Cain to its receiving corps this time around. As a freshman last year, he was suspended for the championship game. He has been a big-play guy for Watson with nine touchdowns and a 19.4-yard average on 32 catches.

MEN IN THE MIDDLE

The newest defensive line terror for Clemson is also the biggest. Freshman Dexter Lawrence checks in at 6-5 and 340 pounds and he has played like an All-American this season. He did not record a tackle against Ohio State but the Buckeyes seemed to shy away from even running in the middle of Clemson’s defense because of Lawrence and second-team All-America Carlos Watkins.

At least partially responsible for moving Lawrence will be 319-pound center Bradley Bozeman, who stepped in for first-round pick Ryan Kelly this season to lead Alabama’s offensive line.

The Tide has not lost much at center with Bozeman, but Clemson’s line and Lawrence in particular, will be his toughest test.

That huge tailback wearing a single-digit jersey number for Alabama probably reminds you of Derrick Henry.

The Heisman Trophy winner who ran for 158 yards and three touchdowns on 36 carries against Clemson last season is gone, but Bo Scarbrough, listed at 6-foot-2 and a questionable 228 pounds, does a pretty good Henry impersonation .

The Tide unleashed Scarbrough on Washington for 19 carries and 180 yards. Technically, he is Alabama’s third option in the backfield. Damien Harris leads the team with 1,013 yards rushing and a 7.2 average per carry and freshman Josh Jacobs has 551 yards and 6.6 average. None of them carried the ball last season against Clemson.