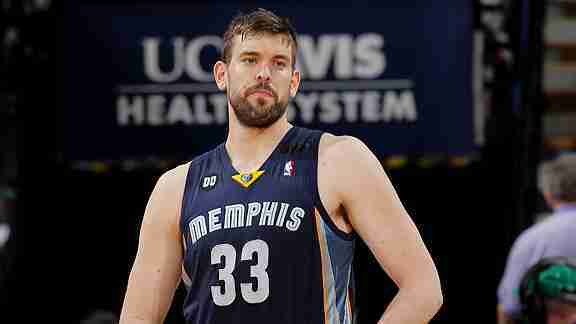 MEMPHIS, Tenn. (AP) _ The Memphis Grizzlies head into the offseason with a major goal: re-signing their free agent All-Star center.

Marc Gasol is in no hurry, he’s on his own timetable.

He plans to take as much time as possible to consider all his options as one of this free agent market’s biggest targets.

“I’ve never been through it like that,” Gasol said Monday. “Take it one day at a time and try to understand what the plan is for the next four or five years of my life.”

The 7-foot-1 center from Spain has been a pivotal player in the best five seasons in Grizzlies’ history. But as they cleaned out their lockers Monday after being eliminated in the Western Conference semifinals Friday night by Golden State, Gasol’s future with the Grizzlies is unclear.

The Grizzlies have made it clear since last summer they want Gasol back, even before they could start talking to him about a new deal in mid-December. Now he becomes a free agent July 1, and questions have been swirling for months on the teams eager to lure Gasol away from the town where he went to high school while his big brother, Pau, played for Memphis himself.

Gasol answered questions for more than 10 minutes, sidestepping a variety of inquiries on his decision. He said he has been busy evaluating the series loss to Golden State, not his pending contract situation. He said he can’t see the future and can’t imagine what it’s going to be like.

He also made it clear his ties to Memphis go beyond basketball.

“My whole family has been here since 2001. The place I used to go watch basketball games is now a Bass Pro Shop,” Gasol said of the Pyramid where the Grizzlies first played in Memphis.

His teammates are split between between optimism and concern about Gasol’s future. Point guard Mike Conley, considered Gasol’s closest friend on the team, said he hasn’t worried about it much.

Gasol’s decision will impact a busy offseason for the Grizzlies. Backup center Kosta Koufos’s contract is up, and Jeff Green, obtained midseason from Boston, has a player option on his deal.

“It’s just taking it day-by-day,” Koufos said of his free agency. “I understand it’s a business. . I’m not looking too far ahead.”

The Grizzlies should be, they need more outside shooting.

A swoon combined with injuries after the All-Star game dropped them from the No. 2 spot they held much of the season to the fifth seed facing top-seeded Golden State. The Warriors exposed Memphis’ inability to ease the pressure on Gasol and power forward Zach Randolph.

Guard Courtney Lee, who led Memphis shooting 40 percent from outside the arc, said the team could use another player offensively.

“If people want more 3-point shooters and want more threes to go down, that’s fine with me,” Lee said. “I can’t carry a whole team’s load. I felt guys did shoot the ball well. .I think when they say that, they want it to be like making 10 to 12 3-pointers a game.”

Next post Airport commission approves minimum wage of $10 an hour

Previous post Changes may be in order after Clippers' playoff collapse