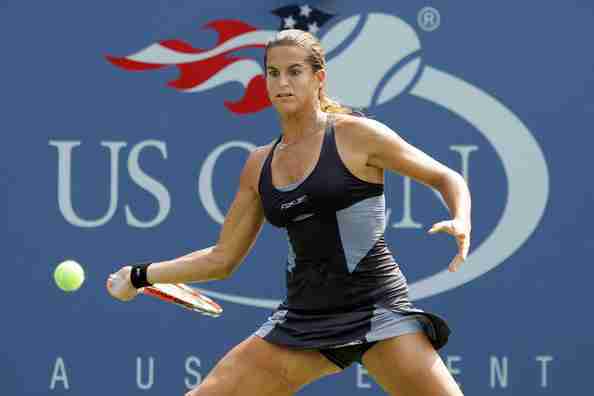 She was inducted into the International Tennis Hall of Fame on Saturday but unable to travel to the ceremony because she’s expecting her first child in early August.

Joining the 36-year-old Frenchwoman were David Hall of Australia, a six-time Paralympic medalist, and Nancy Jeffett, elected in the contributor category.

“Amelie will be here next year, but we want to celebrate her this year,” 1987 Hall of Famer Stan Smith told to the crowd.

Mauresmo, who is now Andy Murray’s coach, won the Australian Open and Wimbledon in 2006 and spent 39 weeks at No. 1 in the WTA rankings.

She won 25 singles titles and was a silver medalist at the 2004 Athens Olympics.

Under mostly cloudy skies on Newport’s grass courts, Mauresmo was enshrined during a 75-minute ceremony that included a presentation of a gold Hall of Fame ring to Billie Jean King.

“This is wonderful to be here to share this moment with all of you,” said King, inducted in 1987.

“Nancy Jeffett has been such a force, particularly in women’s tennis,” King said.

Jeffett was presented by 2002 Hall of Famer Pam Shriver.

“This has been a real love of the game that has brought me to this moment,” Jeffett said in a short speech.

When he was 16, Hall was struck by a car and had to have both of his legs amputated. He is the fourth wheelchair player to be inducted.

“Through the early days after my accident, tennis was like a long lost friend that would come back to me,” the 45-year-old said.

Marion Bartoli, the 2013 Wimbledon champion, also attended the ceremony that was held before the semifinal matches of the Hall of Fame Tennis Championships.