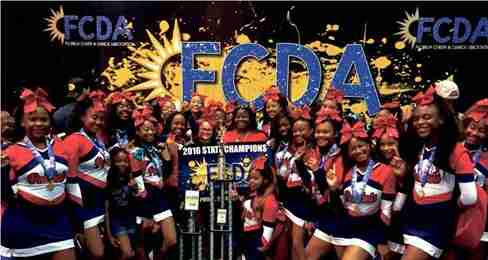 MIAMI – Kennisha Miller caught the cheer leading bug when, as an eight year old, she cheered at an inner city program. She continued cheering during middle school, while attending Coral Gables Senior High and for a short period, at Florida A & M University. In retrospect, it appears that her background as a cheerleader was preparation for her role as head coach of the American Senior High School (AHS) Patriot 2016 Competition Cheer leading Squad.

“I started out coaching on the rec level at the local parks. I did exceptionally well at that level and was ready to move to the next level. My goal was to form a team, take them to competition and try to win it all,” she said of her promotion to high school coaching.

So far, so good. The AHS squad is undefeated (4-0) in local competition and recently won first place and top performance at a state competition. “Now we’re on our way to nationals and trying to get that national title,” said Miller in a telephone interview; referring to the Florida Cheer and Dance Association (FCDA) National Cheer leading Competition on April 23, in Orlando.

The cheer leading squad is comprised of 21 high school girls between 9th and 12th grades. Miller said of the four seniors on the team, three have already earned academic scholarships to attend college.

“Some of them were not cheering. I pulled them out of retirement,” she said, laughing. “I want them to leave their senior year on a bang.”

Each member is enrolled in honors and/or AP courses and several are involved in other extra-curricular activities in school. Coaches ‘Coach K’ Miller and Ariel Hethington, an AHS cheerleading alumna, encourage their squad to have a well-rounded high school experience by focusing on scholastics, sportsmanship, sisterhood, leadership and school spirit.

“To be able to represent our school at Nationals and see all of our hard work pay off confirms that anything is possible if you believe and put your mind to it,” said Kaniah Clark, a sophomore AHS competition squad cheerleader. “Each competition leading up to Nationals has made us stronger physically, mentally and sisterly!” she continued.

Miller is clear about what she wants the young ladies to do at nationals. “Our goal is to win,” she said. Win or lose, however, Miller said “I’m proud of them just for making it this far.”

Previous post The waiting is the hardest part, but worth every single second