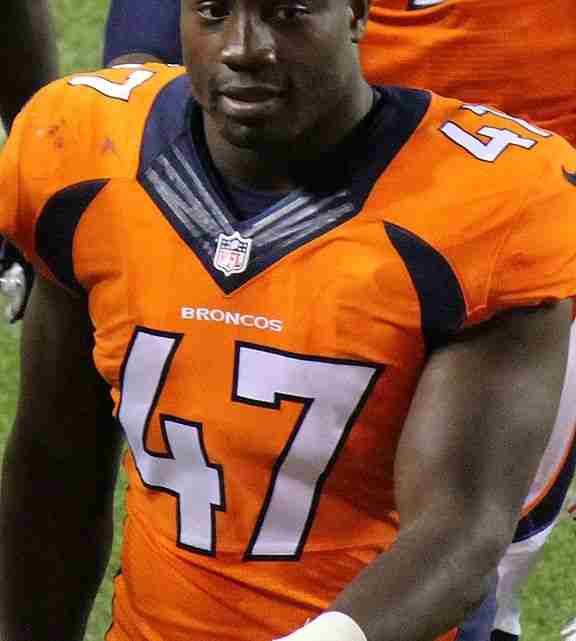 ENGLEWOOD, Colo. (AP) – Like any other NFL player, Zaire Anderson knew the game’s risks but was skeptical he’d ever be the one not getting up off the field someday.

That changed on New Year’s Day when the Denver Broncos linebacker dived while covering a punt against the Oakland Raiders and smacked his helmet into a teammate’s hip, jamming his neck and getting knocked unconscious .

When he came to, he couldn’t get up.

“It felt like gravity was just holding me down,” Anderson said.

Fear swept over him. His heart raced and tears streamed.

As teammates and opponents knelt in prayer in the hushed stadium, Anderson was strapped to a backboard and gingerly loaded onto a cart.

As he approached the tunnel, the players, the coaches, the crowd watched for the telltale thumbs-up that would assuage everyone’s fears.

He couldn’t give anyone that assurance.

Anderson was loaded into an ambulance while the game resumed behind him.

The first sign he’d be OK came in the form of tingling in his hands, “but my legs were still numb,” he recounted.

On the way to the hospital, his legs, too, began tingling. He could move. And walk.

At the emergency room, doctors told him his spinal cord has been compressed but that he’d escaped permanent damage. He didn’t even have to spend the night in the hospital and the next day he joined his teammates for end-of-season meetings.

As he sat at his locker, teammate Corey Nelson leaned in and told him, “I was scared for you. I was so scared, bro.”

Anderson said he was fortunate that the injury happened in the final game of the season. This allowed him to get his head right before having to lace up his pads and hit somebody again.

“It probably is good that it was the offseason because if it was during the season I don’t know how I would be thinking or acting,” Anderson said.

For a while the tingling in his shoulders and the soreness in his neck were constant reminders of how close he’d come to seeing his life changed.

“Everything else was normal,” said Anderson, who was soon lifting again to gain weight and strength.

Instead of making him consider another line of work, however, Anderson said his temporary paralysis that afternoon only reinforced his love for the game.

“I feel like after it happened, it made me realize I just want to play football,” said Anderson, a third-year pro from Nebraska. “It’s something I’ve been doing my whole life and I just know stuff like that happens to players but I just never thought it would happen to me. It happened and I’m just trying to move forward.”

Unless he’s asked about it, Anderson said he doesn’t think about it anymore.

“I really don’t dwell on it as much” he said. “I feel like it’s just something that happened that day and it just comes with the game.”

Shy of walking away, he’s doing all he can to ensure he won’t go through something like that again.

“I think I buffed up a little bit, got a little stronger,” he said.

That, along with proper tackling technique, will help him stay safe, Anderson figures.

Although he won’t do any real hitting until training camp comes around, he insists he doesn’t need that first true tackle to ease his mind.

“I think I already got over that hump,” he said. “I got my mind clear already. I don’t think stuff like that hinders me. I know it’s part of the game. I like hitting. So, if it happens again, it just happens.”