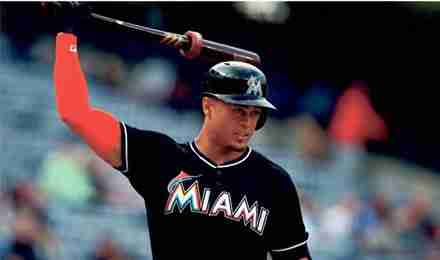 MIAMI – Giancarlo Stanton was in mid-season form during batting practice one spring morning, sending a succession of pitches off or over the fence as teammates looked on, smiling and shaking their heads in admiration.

“Those balls aren’t regulation,” Gonzalez hollered at Stanton. “They’re a little soft. They’re not the real balls.” Stanton grinned because he knew other- wise. The balls were the real deal and so is Stanton, who’s healthy again; making the Miami Marlins’ 2016 outlook much more robust.

Miami’s big bopper has hit 159 homers since 2011, most in NL, according to STATS, and that’s despite missing 202 games. For the second year in a row he’s returning from a season-ending injury.

He was leading the majors with 27 homers and 67 RBIs last June when he broke his left hand. Nine months later his knack for launching moon shots is back, as he showed by hitting a homer over a two-story building beyond left field during spring training.

“This guy does stuff that doesn’t seem possible, right?” manager Don Mattingly said. “He hits balls a long way. I think we know that we are way better if he’s playing.” Stanton agreed. “I’m a good beginning key,” he said. But Stanton has never played on a winning team. Here are things to consider as Miami tries to end a 12-year playoff drought, the longest in the NL:

STAYING HEALTHY: The Marlins will have a modest payroll as usual, leaving them with little depth to overcome injuries. There’s also a dearth of talent in the minor league system for reinforcements. That makes it imperative to keep Stanton and the other regulars off the disabled list. “Everybody has to stay healthy,” ace Jose Fernandez said. “It’s no secret.”

CHANGES OF DIRECTION: The biggest off season upgrades were made in the dugout. Mattingly became the manager after leading the Dodgers to three consecutive NL West titles, and the new batting coach is Barry Bonds, back in the majors for the first time since retiring in 2007 as the steroids-tainted home run king. Both earned raves from players during spring training. “If I can’t learn anything this year from two Hall of Fame caliber players, I have no business being in the game,” first baseman Justin Bour said. “To me this is a great opportunity to come to a club that is talented and young and has a chance to get better,” Mattingly said. “We’ve got a pretty talented core group.”