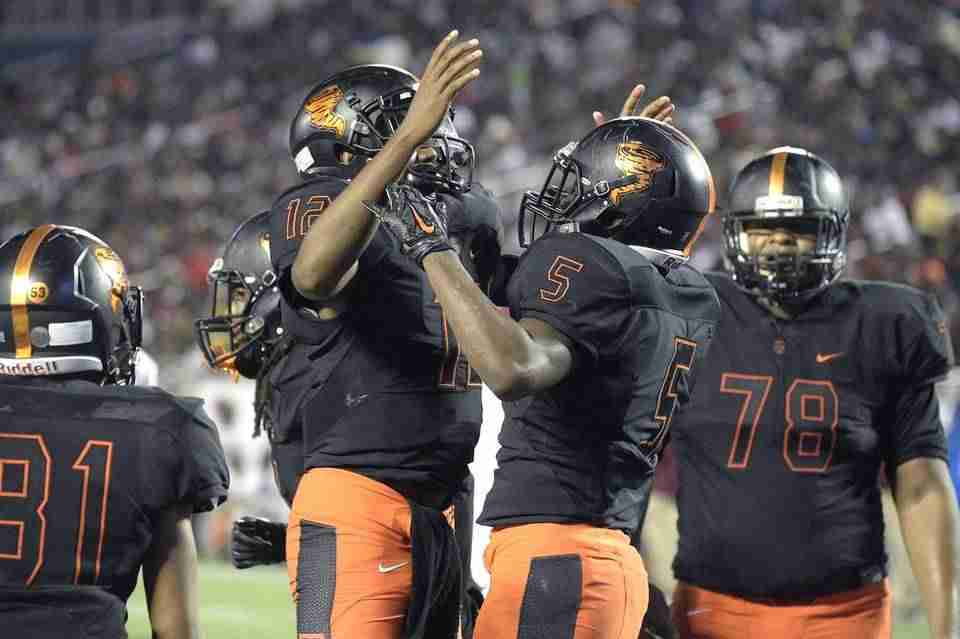 Booker T. Washington (9-5) won their fourth straight Class 4A football championship but needed a fourth-quarter rally to knock off Raines (12-2).

Augie DeBiase’s 25 yard touchdown pass to Dalvin Storey gave the Vikings a 23-22 lead with 10:19 remaining in the game. Booker T. Washington answered back when Richardson connected with Gustavious Dames for a 92-yard score, making it 30-23 with 9:16 left in the fourth quarter.

Raines drove back down the field and were threatening to score when Bishop Bonnett broke off a long run inside Booker T. Washington territory but Marquis Decius forced a fumble which Myron Morris scooped out of the air and returned 81 yards for a touchdown and a 36-23 lead.

The Tornadoes weren’t done as Robert Hicks sacked DeBiase and linebacker Branden Tobar picked up the fumble and returned it for 59 yards.

Decius opened the scoring with a 100-yard interception return in the first quarter.

Raines took a 10-7 halftime lead when DeBiase threw a 36-yard pass to Ronald Patterson with 58 seconds remaining in the second quarter. The Vikings had two other first-half possessions in the red zone but failed to score. They outgained Booker T. Washington 224-22 in the first half.

DeBiase was 18 of 31 for 227 yards with two touchdowns and two interceptions while Alex Rutledge had 156 rushing yards for Raines. Darrius Scott had five receptions for 100 yards and a touchdown for Booker T. Washington.

Next post Islamic center vandalism Suspect is son of educator