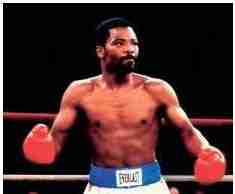 Pryor’s family issued a statement saying the boxer died at his home in Cincinnati after a long battle with heart disease.

Known as “The Hawk,” Pryor was a crowd favorite who fought with a frenetic style, rarely if ever taking a step backward. His fights in the early 1980s with Arguello, the great Nicaraguan champion, were both classics that are still talked about in boxing circles.

But Pryor was a troubled champion, and his career would unravel because of an addiction to cocaine.

“He was very unorthodox and could throw punches from all kinds of angles with great hand speed,” said former Associated Press boxing writer Ed Schuyler Jr. “He was a great fighter, it’s too bad he didn’t have more fights.”

Pryor’s widow, Frankie Pryor, said her husband – who would later speak out about the evils of drugs – also had a side most fans didn’t know about.

“Aaron was known around the world as ‘The Hawk’ and delighted millions of fans with his aggressive and crowd-pleasing boxing style,” she said in a statement announcing his death. “But to our family he was a beloved husband, father, grandfather, brother, uncle and friend.”

Pryor was unbeaten in 31 fights when he and Arguello met in a 140-pound title clash in the Orange Bowl in Miami on Nov. 12, 1982. Arguello was a classic boxer-puncher considered one of the top pound-for-pound fighters, but Pryor would not back off as the two men traded punches for the better part of 14 rounds.

Pryor finally wore Arguello down, stopping him in the 14th round with a flurry of punches. Ring Magazine later picked the bout as the Fight of the Decade.

“It was one of the best fights I’ve ever seen,” Schuyler said. “I’d put it in the top five.”

Pryor’s win was marred, though, by questions about a bottle wrapped in black tape that his corner man raised to his lips on several occasions between rounds in the fight. Many in boxing thought it contained stimulants, but the corner man, Artie Curley, said it was peppermint schnapps.

Pryor would beat Arguello again the next September in Las Vegas, this time stopping him in the 10th round of their scheduled 15-round bout. Arguello went down in the round from a series of punches and declined to get back up.

“Arguello was a great fighter but he could’’t handle Pryor,” Schuyler said. “He could have gotten up, but what was the point?”

The second Arguello fight was the pinnacle of Pryor’s career. He became a heavy cocaine user, and fought only six more times in the next seven years, finishing his career with a record of 39-1 with 35 knockouts.

“I reached out and certain people did not give me their right hand,” Pryor said later of his drug use. “They gave me drugs.”

Pryor was named the “Greatest Jr. Welterweight of the Century” by The Associated Press, and was inducted into the International Boxing Hall of Fame in 1996. He would later travel the world making personal appearances and spreading his anti- drug message.

Pryor is survived by his wife and partner of over a quarter of a century, Frankie Pryor, sons Aaron Pryor Jr. and Antwan Harris, daughter Elizabeth Wagner and three grandsons Adam, Austin and Aaron Pryor III.