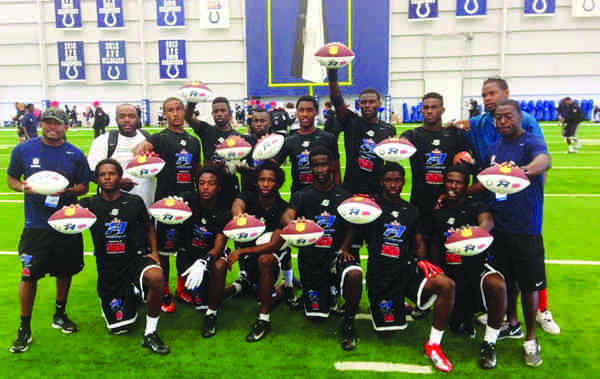 The yearly event features representatives from all 32 NFL teams that play in an elimination tournament until one team is left. Each team must qualify by competing in a regional tournament in the host city, as well as completing a mandatory high school symposium.

Booker T. Washington qualified by emerging undefeated in the Miami Dolphins 7 on 7 tournament June 14-15. The team, based in Miami’s Overtown neighborhood, defeated Hialeah Gardens, American High, Western High twice and Champagnat Catholic to advance to the quarterfinals at Sun Life Stadium on June 15.

After receiving a bye in the quarterfinals, the F-5 Tornadoes defeated Gulliver Prep 27-21 in overtime and then beat Miami Southridge 41-24 to win the regional tournament.

“Winning this game means a lot. We’ve got some great guys out there and they deserve this win,” Booker T. Washington coach Tim “Ice” Harris Jr. said. “We’ve grown stronger as a team. We’ve worked hard and it’s great to see that hard work pay off.”

Advancing to the national championship tournament is nothing new to Booker T. Washington. In 2012, they went to Indianapolis under the pressure of trying to become the fourth straight Miami Dolphins representative team to win the tournament. They ended up beating the team representing the Detroit Lions to win the title and keep the streak alive.

BTW did not qualify for the national championship in 2013 but returned to Indianapolis this year with one goal in mind: to bring the trophy back to Miami. In pool play, they dominated the competition by outscoring their opponents 272-86 and going 7-0.

In divisional play, the F-5 Tornadoes beat the Buffalo Bills 31-10 and the New England Patriots 34-28 to advance to the quarterfinals. They went on to defeat the Cincinnati Bengals 37-17 to move on to the AFC championship game against the team representing the Houston Texans.

Booker T. Washington won a close game against the Texans, with the score at 24-21 late in the second half. Maurice Alexander threw a touchdown pass to Mark Walton to give them a little cushion and then Terry Jefferson and Davante Davis sealed the game with back-to-back interceptions to give Miami a 37-21 victory and their fifth straight 7 on 7 championship appearance.

In the championship game, Miami played against Mallard Creek High School representing the Carolina Panthers. Alexander threw first half touchdown passes to Shaquille Green, Walton and Vaquan Smalls to give Miami a 24-7 lead at halftime.

Carolina’s only score came on their first possession of the second half. Another touchdown pass from Alexander, this time to Antonio Callaway, put Miami up 31-14 and an interception by Callaway sealed their 34-14.

“To be able to not only go undefeated in the regional tournament but also the
national tournament is a very impressive accomplishment,” said Miami Dolphins Manager of Youth programs Troy Drayton. “This is a team that won the district championship, state championship and national championship in 2013. To start off their 2014 football season this way is very exciting not only for the kids but [also]shows the hard work that the coaching staff is putting in.”

In the tournament, Booker T. went 12-0 and outscored their opponents by a total score of 445-176. They were led in receiving touchdowns by Walton with 15, Smalls with 11, Callaway with 11, Scott with 9 and Green with 6.

Jefferson led the defense, picking off 12 passes in 12 games. With interceptions counting as 3 points in the 7-on-7 format, Jefferson scored 36 points without playing a down on offense. Davis contributed with four interceptions and Osie Rose and Callaway had three each.

Booker T. Washington will kick off their 2014 season in Chesapeake, Va., next month against Oscar Smith High School and then travel to Tucker, Ga., against Tucker High. They go into the season on a 26-game winning streak and have lost only once in the past two years.

This story was provided by the Miami Dolphins organization.

Next post Some nonviolent offenders could be out in 2015