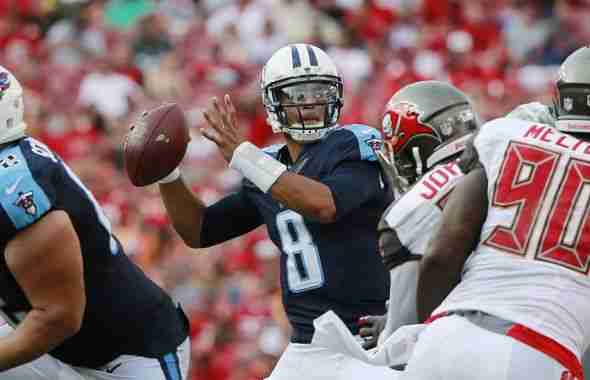 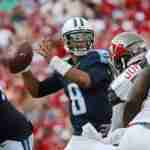 Marcus Mariota threw for four touchdowns in his debut for the Tennessee Titans, outplaying Jameis Winston in a highly anticipated season opener featuring the top two picks in this year’s draft.

Both rookie quarterbacks continued to shun comparisons after Sunday’s 42-14 rout renewed a debate over whether the Tampa Bay Buccaneers made the right decision in selecting Winston first overall.

“When somebody plays as great as he did, of course you’re going to say that,” Winston said. “But it’s not about how you start, it’s about how you finish. Obviously we have to improve during the course of the season.”

Mariota stressed that the Titans do, too, despite dominating Tampa Bay, which like Tennessee went 2-14 last season.

“It means we’re 1-0. For me, it’s taking it one day at a time and just executing to the best of my abilities,” the 2014 Heisman Trophy winner said. “It’s a good start for us, but it’s just the first game. We’ve got to continue to get better and not focus on stats.”

In addition to helping the Titans end a 10-game losing streak, Mariota improved to 2-0 in head-to-head meetings against teams led by Winston, the 2013 Heisman winner.

The second pick in the draft isn’t claiming an upper hand in a budding personal rivalry.

“I don’t put much thought into that. Jameis is one of those guys, he’s a great competitor,” Mariota said. “Even in college, they’re never out of it. Jameis is probably going to bounce back from this, and I’m sure he’ll be ready to go next week.”

Mariota passed for 209 yards without an interception to join Hall of Famer Fran Tarkenton as the only players to throw for four or more TDs in their first NFL game.

Tarkenton did it for Minnesota against the Chicago Bears on Sept. 17, 1961. Mariota, who sat out the fourth quarter after building a 42-7 lead, became the first to do it in the opening half of a debut.

Winston did something rare, too, becoming the first quarterback since Brett Favre in 1991 to have his first NFL pass intercepted and returned for a touchdown.

Mariota, meanwhile, teamed with Kendall Wright on a 52-yard TD play less than two minutes into the game and also had TD throws of 12 yards to Bishop Sankey, 4 yards to Harry Douglass and 1-yard to Delanie Walker on the way to a 35-7 halftime cushion.

The Titans, who didn’t score more than 28 in any game last season, scored on four of five possessions in the opening half. Mariota led another TD drive to put Tennessee up 35 points midway through the third quarter.

Notes: Winston threw TD passes of 5 and 41 yards to Austin Seferian-Jenkins, finishing 16 of 33 passing for 210 yards, two interceptions and four sacks. … Coty Sensabaugh, starting in place of injured Titans cornerback Jason McCourty, picked off a sideline throw and ran 26 yards for a TD on Winston’s first pass of the game. … Mariota went 13 of 16 with no interceptions. He was sacked twice before being replaced by Zach Mettenberger with 14:49 remaining in the game. The Bucs are 0-9 at home under coach Lovie Smith.