Changes may be in order after Clippers’ playoff collapse 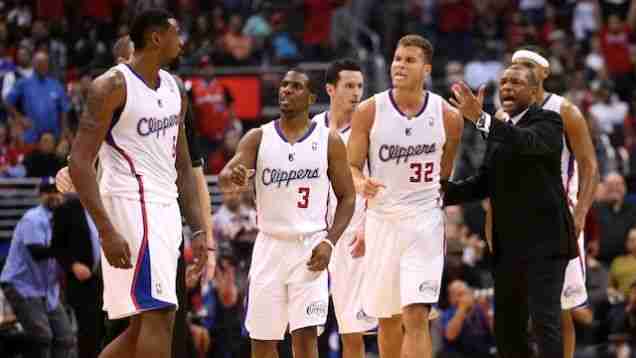 LOS ANGELES (AP) _ The Clippers were on the verge of finally shedding the dubious reputation that has dogged them for decades only to lose in the second round of the playoffs for the third time in four years.

Changes could be coming in the offseason to a team that will surely be haunted by its collapse for a long time.

Chris Paul, Blake Griffin and DeAndre Jordan were within a game of leading the Clippers into the Western Conference finals for the first time in the franchise’s 45-year history only to blow a 3-1 lead and lose the last three games by a combined 46 points to the Houston Rockets.

The trio was 3-0 in Game 7s together until losing 113-100 Sunday on the road. The Clippers never led and trailed by 20 points, ending a season in which they finished 63-33 under second-year coach Doc Rivers.

Expectations for the Clippers have risen dramatically in the last few years, especially since new owner Steve Ballmer took over this season.

The options are plentiful, including revamping the roster to shake up the Big Three of Paul, Griffin and Jordan after four seasons without a title together, upgrade the bench, or relieve Rivers of his title as president of basketball operations and have someone else focus on handling personnel moves while he coaches.

Jordan will be an unrestricted free agent and can re-sign with the Clippers for more money than any other team could offer him. Or he could decide to leave the city where he’s spent the first seven years of his career.

Paul overcame a strained hamstring that caused him to miss the first two games of the conference semifinals and led the Clippers to blowout wins at home against the Rockets. He had 26 points and 10 assists in Sunday’s loss that meant he still hasn’t reached the conference finals in his 10-year career.

“I don’t really see growth in a loss,” he said. “It’s a long time before you get to the playoffs again.”

Griffin experienced a career breakout in the playoffs, helping the team beat the defending NBA champion San Antonio Spurs in the first round while showing the all-around offensive and playmaking skills he’s developed. He had 27 points, 11 rebounds and six assists Sunday.

“We were close, but close almost doesn’t count,” he said. “You can’t look at anyone but ourselves. In a good way, guys were pressing and trying to get it done. Guys just wanted it so bad, myself included, and we didn’t make the plays.”

The lack of bench production caught up with the Clippers in the playoffs and was especially glaring in Game 7. Sixth man Jamal Crawford was 6 of 18 from the floor for 17 points, with the rest of the reserves combining for four points.

Austin Rivers, the coach’s son, shone in the first round against the Spurs before disappearing. Spencer Hawes never found a role and Glen Davis didn’t play to his potential, in part due to nagging injuries.

Among the other starters, Matt Barnes was scoreless in Game 7, while sharpshooter J.J. Redick was 2 of 9 from 3-point range and had a team-high six turnovers.

The Clippers fell behind early in Game 7 and never appeared energized, the way they did in each of their three wins by blowout margins of 16, 25 and 33 points.

They were coming off a stunning collapse at home in Game 6, when they blew leads of 19 points in the third quarter and 12 points with 7 1/2 minutes left in the game and lost 119-107.

The Clippers will have months to relive their inglorious exit, knowing they had three chances to eliminate the Rockets and failed each time.

“I’ll think about it for a long time and so will the players,” the elder Rivers said. “This is on everybody. It’s not on the stars, the bench, whoever.”