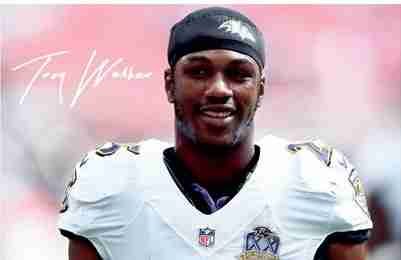 BALTIMORE – Baltimore Ravens corner back Tray Walker, who played one season in the NFL, died last week of injuries from a dirt bike crash in Miami.His godmother confirmed the 23-year-old Walker’s death, according to the Ravens.

Walker was riding a Honda dirt bike with no lights and wearing dark clothing when he collided with a Ford Escape on Thursday night, Miami-Dade Police said. He had been in Jackson Memorial Hospital in critical condition.

A fourth-round 2015 draft pick, Walker played in eight games last season, mostly on special teams. Ravens coach John Harbaugh wrote a heart-felt letter to his players Friday before Walker died. Later, in a statement, Harbaugh said, “Tray was a young man with a good and kind heart. He was humble and loved everything about being part of the Ravens’ team. He loved his teammates – the practice and the preparation – and that showed every day. … I’ll never forget that smile.”

General manager Ozzie Newsome, who drafted Walker, said, “Tray was one of the most humble persons we brought in for a pre-draft visit. That was striking. After we drafted him, he and his family were so excited to receive the call that he was about to become a Raven. It was one of the calls I will always remember. There was such joy for Tray and his family.”

Walker made only one tackle with Baltimore, but he made a lasting impression on those around him.

“Tray was a young man who was full of energy and promise,” quarterback Joe Flacco said. “This is very hard to wrap my head around, and I am devastated.”

“Tray had a hard shell,” Ravens corner back Jimmy Smith said, “but once you broke through that, you found a person who was learning how to become a man and was so eager to be a great person and professional. I am heartbroken for his family.”

Walker’s death was felt throughout the organization, all the way to the top. “We have two sons not too much older than Tray, and we can’t imagine how much his family is suffering,” team owner Steve Bisciotti said. “This is so sad. The right words are hard to find at a time like this.