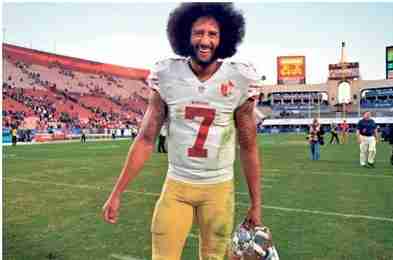 Kaepernick has been outspoken on issues of racial and social justice. The free-agent quarterback became a polarizing figure among NFL fans for his decision to sit, and then kneel, during the national anthem last season to protest police brutality.

He remains unsigned after opting out of his contract with the 49ers.

That didn’t stop the NFL Players Association from naming him its Community MVP for Week 1 this season. The union announced Friday that on Sept. 7, Kaepernick gave $25,000 each to four charities, part of his pledge last year to donate $1 million to organizations working in oppressed communities.

The groups are DREAM, which provides after-school activities and sports opportunities to New York youth; Coalition for the Homeless; The Gathering for Justice’s War on Children, a program meant to reduce child incarceration that will launch next year; and United We Dream, which advocates for young immigrants.