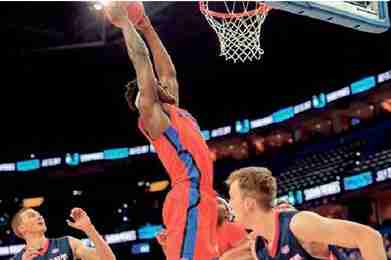 After the Gators saw a 20- point first-half lead cut to nine early in the second, Barry had three baskets and hit a pair of free throws during a 16-0 run that put Florida ahead 59-34 with 12 minutes to play.

“I really just tried to be aggressive,” said Barry, who came off the bench to play 21 minutes. “My confidence kind of increased when I was able to knockdown some shots.”

Barry had 16 points in Thursday’s 73-66 victory over St. Bonaventure.

Florida (4-0) also got 12 points from John Egbunu, while Devin Robinson chipped in with 11.

Florida scored the first 15 points and took a 38-26 halftime lead. The Gators held Belmont without a 3 for the initial 12 minutes but the Bruins hit three from long range to close out the half and cut into a 24-4 deficit.

“We got into a really good defensive rhythm against a tremendous offensive team early on,” White said. “Not that it maintained at that level for 40 minutes but we had enough of it that was at that level during the next 35 or so minutes.”

Florida: White’s squad continued its successful swing around Florida with the O’Connell Center in Gainesville nearing completion of a $64.5 million renovation. The Gators previously won a pair of games in Jacksonville and another in Lakeland.

Bradds took nine shots after averaging 16 in the Bruins’ first two games. “He was the focal point of the scouting report,” White said. “We threw a bunch of different bodies at him and gave much different looks, and he goes 7 of 9. Evan Bradds is one of the best offensive players in the country regardless of level.”

Belmont: After going 11 for 17 from the free-throw line in their first two games combined, the Bruins made 14 of 22 Monday night.

Belmont: The Bruins will see how they matchup against a Top-25 team Friday night at No. 23 Rhode Island.

Florida: The Gators have a chance to further impress the AP Top-25 voters this week at the AdvoCare Invitational in Lake Buena Vista, Florida. In matchup of teams receiving votes in this week poll, Florida opens play Thursday night against Seton Hall. With a victory, the Gators could meet No. 11 Gonzaga in the semifinals Friday night.

Next post Bucs WR Evans apologizes for not standing for anthem