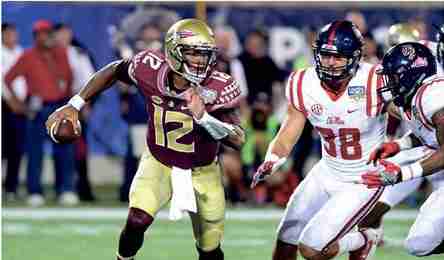 Hamilton’s philosophy has been to run a motion offense that also relies on strong inside play. This season he has ditched that for a more on- tempo system because the Seminoles have an abundance of perimeter players.

Hamilton, who is going into his 15th season at Florida State, acknowledges that this has been the biggest changes he has made to a system between seasons in his 29 years as a college coach.

“This will fit more of who we are,” Hamilton said. “We are not going to be as much of a stand and shoot team. We are going to be able to play off the move and penetrate. We will be playing more four outside players and one inside. It will make us more unpredictable and harder to defend.”

Florida State was third in the Atlantic Coast Conference in offense, averaging 78.0 points per game. But it was 13th in defense, allowing 74 points. Both of those set new marks in the Hamilton era.

“We are going to be playing even faster this year,” said Dwayne Bacon, who led the team in scoring (15.8 points per game) and rebounding (5.8) last season. “We’ve got guys that can run the floor and the big guys can get up and down.”

Bacon also noted that a huge part of preseason practices has been defense and that during the first week they were spending at least two hours per session on defensive-specific drills.

The Seminoles started last season by winning 10 of their first 12 games, but struggled in Atlantic Coast Conference play as they went 8-10. They made it to the second round of the NIT to finish 20-14.

Some other things to know about Florida State this season: IMMEDIATE IMPACT? Jonathan Isaac comes in as one of the highest-ranked recruits in program history. The 6-foot-9 forward has the size and body of a forward but the quickness and shooting skills of a perimeter player. The Seminoles have also added a pair of talented guards in CJ Walker and Trent Forrest.

FRONT LINE DEPTH: Michael Ojo and Phil Cofer are back after being beset by injuries last season. Ojo, a 7-foot-1 senior center, missed all of last year due to a knee injury while Cofer, a 6-foot-8 junior forward, played in only 11 games before having ankle surgery.

BACON: Bacon said that conference play did wear him down but that he has worked during the offseason on conditioning along with his perimeter shooting. The 6- foot-7 sophomore guard struggled last season on shots beyond 15 feet.

POINT: Xavier Rathan-Mayes saw his scoring average drop from 14.9 to 11.8, but if Hamilton’s system lives up to its expectations of having more players creating opportunities, that should allow the 6- foot-4 junior to have more chances. As a true point guard last season, Rathan-Mayes was focused more on trying to get the ball to teammates instead of taking an open shot.

TOUGH START TO CONFERENCE PLAY: Florida State has a favorable non-conference slate, which includes an appearance in the Preseason NIT tournament, but it will be tested early in conference play. Five of the Seminoles first seven ACC games are at home, but there is a stretch from Jan. 10-21 where they face Duke, go to North Carolina and then host Notre Dame and Louisville.

Next post Wells Fargo CEO to emplyees: ‘We’re Sorry’ for the pain

Previous post Students prepare to compete for funding and mentoring