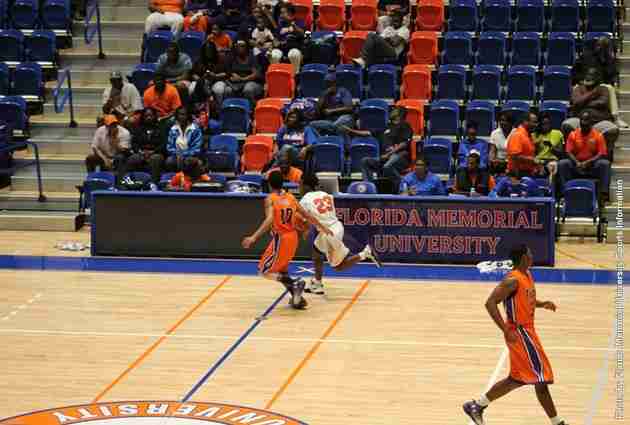 MIAMI GARDENS, Fla. – Florida Memorial University (FMU) was defeated by Warner University in the conference’s championship game, 79-63. With the win, the Royals received the conference’s automatic bid to the NAIA DII National Tournament that began March 8 in Point Lookout, Mo.

The first half was a defensive struggle with both teams struggling to put points on the board. The first 20 minutes featured six ties with the largest lead coming from Florida Memorial at six in the opening minutes of the game.

To start the second half, Warner’s Josh Ellis made back-to-back threes followed by a three by teammate Nick Macon to turn a 27-27 halftime score into a 36-29 Warner lead. That lead extended to double-figures a few minutes later when Warren Hall hit a three to make it 46-36.

Hall continued to find the bottom of the net over the next few minutes and a basket by Ellis with 6:45 to play pushed the Warner lead to 21, 63-42.

The Lions continued to fight until the final whistle but Warner made 19 of their 26 free throw attempts in the second half to help close out the game.

Warner shot 40.7 percent from the field, including shooting at a 53.3 percent clip in the second half, while Florida Memorial was held to 36.1 percent on the night. Warner also held the edge from outside, making 12 threes compared to eight by FMU.

Florida Memorial was led by Davon Williams with 11 points and 10 rebounds on the night. Aaron Bryant made nine of his 15 points from three for FMU. Kody Williams had 12 points and seven rebounds for the Lions.