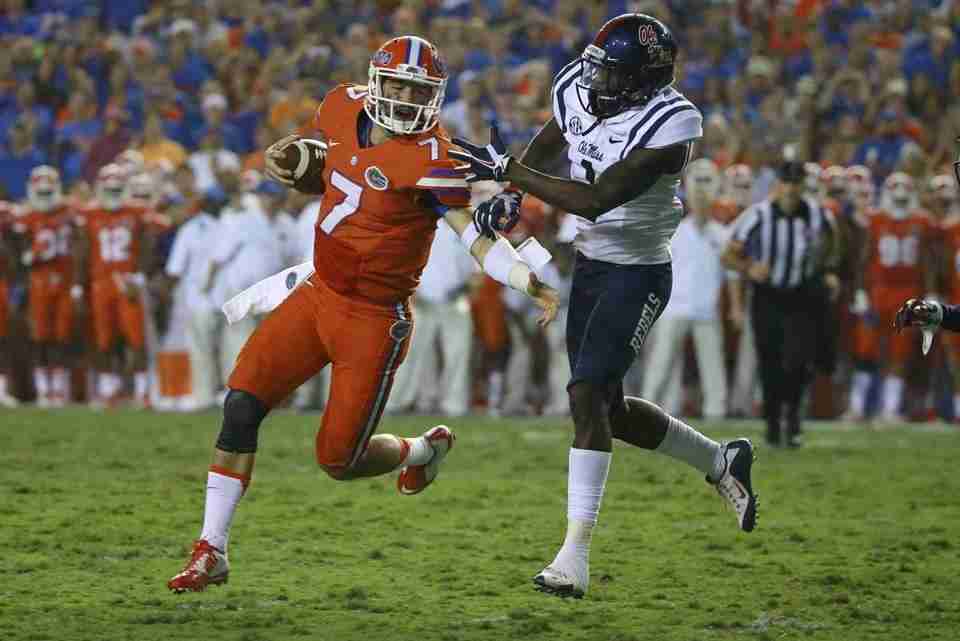 By MARK LONG
GAINESVILLE, Fla. – Chad Kelly is probably going to feel this one for a few days. No. 3 Mississippi might have to deal with it considerably longer.

Kelly was hit, hurried and harassed early and often in a 38-10 loss at 25th-ranked Florida on Saturday night. Kelly finished 26 of 40 passing for 259 yards, with four sacks, two fumbles and an interception. He threw a touchdown pass with 4:04 remaining, but it was too little too late for the Rebels (4-1, 2-1 Southeastern Conference.)

“Being the leader of the offense, it starts with me,” Kelly said. “I’ve just got to do a better job for our team. Losing is the worst feeling ever.”

Ole Miss entered the game looking to back up a huge win at Alabama two weeks ago. The Rebels enjoyed a plus-five advantage in turnovers in that one. Against Florida, they were on the opposite end. The Rebels turned the ball over four times, beginning with running back Jaylen Walton’s game-changing fumble in the first quarter.

The Gators (5-0, 3-0) scored five plays later to take a 13-0 lead. And it got worse from there, with Will Grier finishing with four touchdown passes in the first half as Florida raced to a 25-0 lead.

“They beat us in every facet of the game,” Ole Miss coach Hugh Freeze said. “We didn’t play with the intensity that we needed to and we didn’t take care of the football. We had a solid plan, but we didn’t execute it.”

The Gators walked away with a signature win in coach Jim McElwain’s first season in Gainesville.

Grier was one of more than 20 Florida players who battled a stomach virus during the week. Grier was feeling so ill Thursday and Friday that the Gators considered giving Treon Harris the nod. Grier made enough progress to start and was sharper than ever.

The freshman completed 24 of 29 passes for 271 yards. He was poised in the pocket, precise with every throw and even closer to perfect than he was down the stretch against Tennessee last week.

“He was really solid,” Freeze said. “I hope we have a bunch get the flu next week. I think that’s something we need to look into. They sure played extremely well with it. But I think Grier is a really good player. They had a good plan, used misdirection early on and slowed us down some. They played extremely well.”

Grier’s start was the difference in Florida’s latest victory. His impressive first half gave him six TD passes in a span of three quarters. With All-American Robert Nkemdiche draped all over him, Grier found Demarcus Robinson on a 36-yard score in the first quarter. He hooked up with Jake McGee for a 2-yard score a few minutes later, after Walton fumbled.

Grier added two more TD passes in the second quarter, beating a third-down blitz with a quick slant to Brandon Powell. Powell slipped a tackle and outran two defenders down the sideline for a 77-yarder. Grier added a 15-yarder to Antonio Callaway with 20 seconds remaining in the half.

And the unit opened up holes for Kelvin Taylor, who ran 27 times for 83 yards.

“This is SEC football,” Rebels rover Mike Hilton said. “If you don’t come to play well, this will happen. We didn’t come to play well and Florida did and that’s what happened. But it’s not devastating to us. We still have our dreams ahead of us. We’re still in control of the SEC West, we’ve just got to win each game here on.”

“I’m concerned for everything, that being one of them,” Freeze said. “Chad Kelly was under a lot of pressure. But credit to them. We have to get our guys better prepared.”